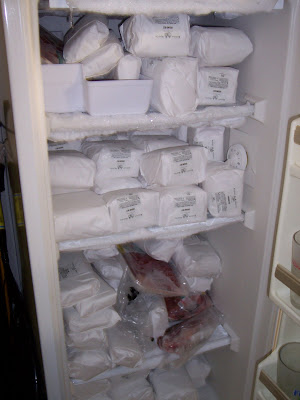 Because of the previous post I felt it was time to come around in the circle of life.

My girlfriend Chris owns a seven acre farm. They have had cows, chickens, ducks and a miniature horse all at various points. She is the daughter of a vet and a nurse and has the most kind and lovingly tender heart that I have ever known. For some reason, the animal kingdom (and kids) just naturally gravitate to her. She has even taken in a stray pigeon, nursed it back to health and then set it free. But she is also practical. She gathers eggs for breakfast and would milk the cows if she still had them. Animals are meant to be providers.

Being more of a city girl myself I have a warped sense of the food chain. My food comes from the grocery store or if I'm feeling fairly adventurous I head for a farmer's market.

So when Chris told me that they had a cow that they were taking to the market and did I want half I naively said "of course!"

As I took my kid to the slaughter house to pick up our meat, a strong smell hit me. I'm not sure what the smell of death is but I think that might have been it. I thought about turning around and heading back to Winco's meat dept for something that was recognizable and not so scary. I felt a little pang of guilt for not even knowing it's number, gender or if it had any next of kin to notify.

Unfortunately, our slaughter guy must have sensed "newbie" all over us and grabbed my son to take him "in the back" to see the behind the scenes action.

Five minutes later, Spencer returned a little greener than when he had unwillingly left my side. Quietly he whispered that he had seen pigs, cows, sheep and even a horse hanging fleshless on huge metal hooks.

We quickly gathered up our four boxes of meat and sped home. As I opened up the goods, I began to sort and determine what cut was what and how I might prepare a feast for dinner. We seemed to be filling up the freezer rather rapidly and as I mentally started counting out the packages of hamburger I found that I had slightly underestimated.

One hundred and twenty pounds of ground chuck later I began nervously laughing.

So if you ever get up here to Oregon, stop on by for a spell. I have an extra bedroom and plenty of food. I'll make you anything you'd like...as long as hamburger is in the recipe. Grandma "You need to be able to live through the next great depression, kid" Edith would be so proud of you and your over-stocked freezer! I'm now expecting 119 more hamburger recipes.

You know, if your fam. had stayed in Humboldt longer, you might've gotten the childhood experience that I did of helping to wrap the meat after Gram slaughtered one of her cows. We would all be huddled together in her freezing cold barn with the cow hanging on a big hook. Grandpa and Dad would hack off pieces of beef, slap them on the table, and we would wrap and mark them. Now THAT's quality family time! I'll never forget that sight and smell as long as I live.

I lived very close to a slaughter house for several years.

The hogs knew. They knew what was coming. They started screaming like nobodies business. I had to take my daughter into the house when it was hog slaughtering time.

Now, if only brussel sprouts would scream so the vegans could experience the same feelings.

I can't even imagine what that must have sounded like!

If a brussel sprout screams and there is nobody around to hear it does it still make a sound?

Hee, hee I love the thought of the silent screams of the sprouts.

Hey, if you ever want or need to make your hamburger go further, try mixing it with oatmeal. I actually read about this years ago in a recipe on a box of Quaker Oats.

I forget the exact proportions, but it was either 50/50 or maybe 1/3. You boil up some oats and then knead them in to your ground beef. Then you make hamburgers however you normally do. I thought it tasted better than just plain hamburger.

The wife never seemed interested in trying it so I haven't had oatburgers in quite some time.

I wonder if *24-08 would eat oatmeal. I mean, if it was cooked just right. A pat of butter, and a sprinkle of sugar?

199 recipes? Gawd, I wonder how many ways you can fix hamburger. Wait, I do not wonder.

(#106) I add some cumin, and a little bit of red onion myself. A hint of pepper, and if I am feelin' a little daring, a touch of chili powder.

Hey, thanks to Fred you could extend those 120 pounds to at least 200! That's a lotta meatballs.

MMMMM..oatmeal. Thanks for the hint Fred. I wish I would have known that years ago.

Boy- I always knew you had a spicy side.

Kris- When are you coming up? we could make a lifesized Elvis sculpture of oatmeal and hamburger and enter in into the world book of records!! Just a thought.

"Hey, if you ever want or need to make your hamburger go further, try mixing it with oatmeal. I actually read about this years ago in a recipe on a box of Quaker Oats."

Most fast food chains have been doing that for years.I once read somewhere that McDonald's uses about 50% oats mixed with some sugar.

Ker, I read your comment just before going to bed and had a dream about trying to make a sculpture out of hamburger. It wouldn't stick and kept falling apart, and I was completely distraught and trying to stick skewers in it to help it hold.

Thanks, mresquan. I really didn't need another reason not to eat at those nasty places, but reminders are always good.

esquan wrote, "Most fast food chains have been doing that for years.I once read somewhere that McDonald's uses about 50% oats mixed with some sugar.".

Hmmm... then why is it I dislike McDonald's hamburgers but love my own oatburgers?