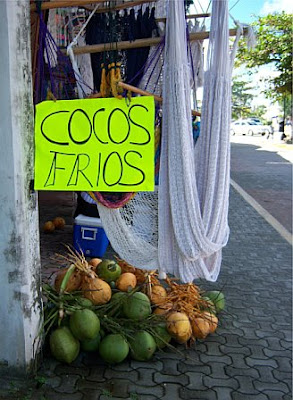 Really. It was bouncy and shiny and curly without being frizzy. It was the kind of hair I can't get here no matter how much goop I use in it or how much time I take with it. Maybe it was the humidity; maybe it was the water. All I know is that here I am back in good old Humboldt - and my hair is back to its normal frizzy and unruly state of being, much like my mind.

This is by no means a complete travelogue. Who really wants to be bored with all the details of someone else's vacation? It's just a few selections from the journal I wrote in madly every time we were still, as well as some photos from our time in the Yucatan.

Tuesday, December 4
The smell of jasmine is overwhelming as we sit drinking cafe con leche at a little restaurant in the center of town. The voyage was long and exhausting. We drove to San Francisco, took a bus to the airport, flew to Guadalajara, Mexico City and then Cancun, took a bus to Playa del Carmen and somehow ended up on a slow-moving chicken bus to our final destination. After 30 continuous hours of traveling, we finally arrived in Tulum. Our hostess Janet welcomed us and quickly showed us all we needed to know: which taqueria was pretty but served awful tacos, how to turn on the hot water, the joys of Mexican toilets, and where to find good coffee in the morning. I immediately jumped into a cool shower. Squirrel followed, sweetly attempting to make it our first romantic honeymoon event. I was ridiculously afraid of getting the water in my mouth and couldn't enjoy kissing him.

We walked downtown for dinner but were too tired to do any real exploring, so we ended up eating at a restaurant decidedly geared toward tourists. I watched in horror as the couple across from us poured catsup on their tacos. Our food was mediocre at best, but the cerveza was cheap, ice cold, and at that point the most delicious thing I've ever tasted. Back at the Posada Luna del Sur, we were both asleep by 9. 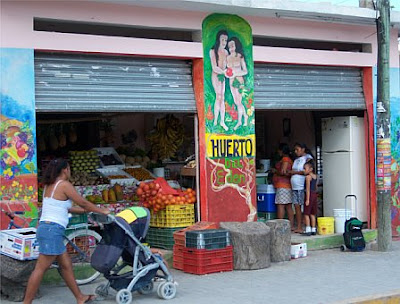 This afternoon we took a taxi to the beach. I wept when I saw the ocean. Any words I could use to describe the colors and the warmth and the utter beauty would be no different than any other cliche' ever written about the amazing Caribbean waters. 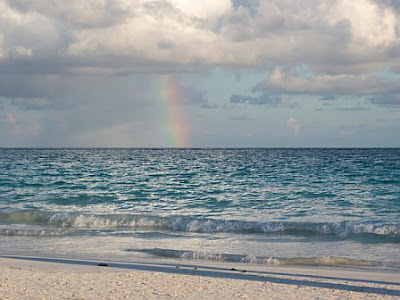 Wednesday, December 5
Today I spent the morning walking through the cemetery, across the main road and through the back streets to where the town butts up against the impassable jungle. The farther I walked, the more smiles and stares I got. 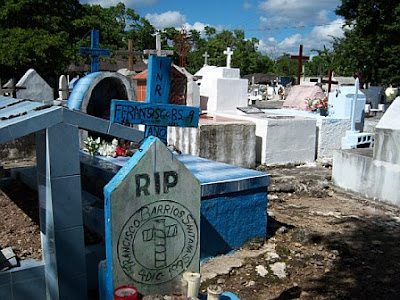 I love the dusty, dirty pueblo with children and turkeys running around and laundry hung on roofs and in backyards. Many of the women here still wear the traditional huipils - white dresses trimmed in beautiful flowered embroidery. There are shrines in every yard to the Virgin of Guadalupe and Christmas lights in the palm trees. As I move by I can hear the lilting voices of the women talking to each other - some inside their houses; some outside. This is the first time that I've deeply wished to know Spanish. I can communicate basic needs, and it hasn't bothered me up to this point that I can't understand the conversations around me. In some ways it's extremely peaceful in its isolation. But I would like to understand the women - to listen in brief passings and perhaps overhear their favorite jokes...or their latest troubles...or what they plan to cook for dinner...or their dreams for their children. 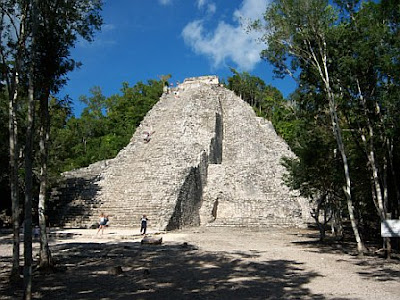 Thursday, December 6
I am sitting under a tree in the heart of the Yucatan jungle waiting while Squirrel is climbing the large pyramid Nohuch Mol. I thought I might want to climb it too when we got here, but by the time we did, and I looked up at the people butt-scooting their way down with barely contained panic, the only thing I could say when Squirrel asked if I would join him was "Hell no!"

I imagined myself becoming a Mayan sacrifice, my body contorting in the air until I landed on the ground with my neck twisted underneath me. Only in this case, instead of being flung gloriously from the top by a warrior, I would have gotten my sandal caught on the edge of a rock, lost my balance and toppled to my death, hitting every stone step on the way down. It's debatable whether the fall or the sheer embarrassment would have killed me first. 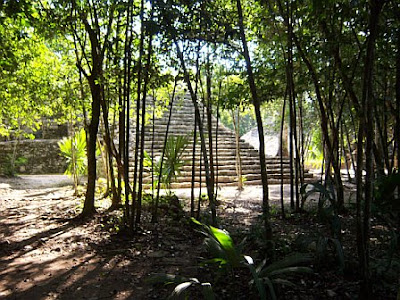 Posted by Kristabel at 9:32 PM

Really beautiful (your words and the pictures). I can't wait to see more. Thanks.

Welcome back! I went to Mexico probably 8 or so years ago and we also went to some ruins. Unfortunately I didn't have the foresight to NOT climb the pyramid, and once I got to the top, wondered where the elevator was, so I could get back down. I'm not afraid of heights... I'm afraid of coming back down from them.
So yeah, I was one of those people, butt-scooting my way down, as you said. Very undignified, but clearly successful. :-)

On an unrelated note, I'm imagining that you have curly hair, and thusly recommend Jessicurl's products. I won't do a sales pitch or anything (I don't even have curly hair!), but she's local and she makes all sorts of awesome curl-taming products. And she's lovely. Jessicurl.com.

Your hair is always rockin my dear, here or in Mexico for that matter.

Thanks for your lovely honeymoon photos in your earlier email. What a beautiful place to celebrate your marriage. I've spent lots of time in border bars in my youth, but have yet to experience the beauty of any comparable shoreline.

It's boring around here Red. I'm in need of your influence to spice up my week. How about that sushi and gossip session at TOMO we chatted about? Let me know if you can squeeze me in :)

Thanks, Monica. I'm very impressed with your pyramid climb. I can't imagine coming down any other way but the butt scoot! And thanks, also for the hair info. I'll have to check it out.

Erin - look at your cute face!

I have plenty of squeezing time for you and for Tomo. Let's do it.

Those pictures are to die for. I'm with Erin, your hair leaves little to be desired. Flowy strawberry curls, mmm, mmm, mmmm. Hot stuff baby!!

How was the affair with the cabana boy Ernesto? Oh, were we not supposed to discuss? Kidding!!

Your pictures are beautiful. I'm partial to the cemetary but tend to be drawn to them. It looks as if the ones in Mexico are more festive. You gotta love a culture that celebrates and recognizes that part of the life cycle.

we don't want to talk about poor Ernesto. He found out that machetes aren't just for cracking open coconuts

I visited the ancient city of Teotihuacan near Mexico City in 1982. It was very interesting. I felt a little vertigo for a moment, but it felt like I was on top of the world. Just went down the steps very carefully.