It's been a gorgeous sunny spring day here in Bear River Valley. Squirrel headed to work early this morning leaving me to enjoy some solitude and some half-assed plans to be productive. Weeding, spading and hoeing were all on my mental to-do list as were sweeping cobwebs off windows and folding laundry. Then I planned to hike up to the god-forsaken water tank to make sure all was well with the supply. But the sun streaming through the bedroom window and some spring fever friskiness distracted me, and I decided to put my productivity on hold for a bit to try out one of my new purchases from Portland.

A half-hour...oh, alright, maybe an hour....or two...later I was energized, calm and focused and proceeded to get to work clearing giant thistles out of the flower beds. The heat on my back felt good as I dug and pulled and swore I'd never let the weeds get that out of hand again.

We are very isolated here. Our closest neighbor is at least a half-mile away. A busy day on the road in front of our little old house is two cattle trucks and a car. For a girl who likes to run around naked singing ABBA songs at the top of her lungs, this remoteness works wonderfully.

So it's always a surprise when someone stops by. This afternoon I noticed a car I'd never seen before drive by. Then again going the opposite way. It stopped just past the house and a tall handsome man I didn't recognize got out. He was looking for someone named Jim. I didn't know Jim, but I ran in and grabbed the cordless phone for him to use. Unfortunately I had left it off its base for too long and the battery was dead, so I invited him in to use the old-fashioned phone tethered to the wall in the kitchen.

I pointed to the door and waited in the living room while he used the phone. I heard him repeating some directions the person on the other end was giving him, and he said he'd be there in a few minutes. There was a pause, and then the stranger laughed - a high-pitched nervous chuckle that didn't sound like it should have come from his body. He hung up the phone and exited the kitchen quickly. His face was flushed, and he barely looked at me as he mumbled "Thanks" and hurried out the door. I figured he must have been really late to make such a hasty exit. Feeling a little tired, I walked into the kitchen to make some coffee and saw just what he must have seen as he turned to hang up the phone: 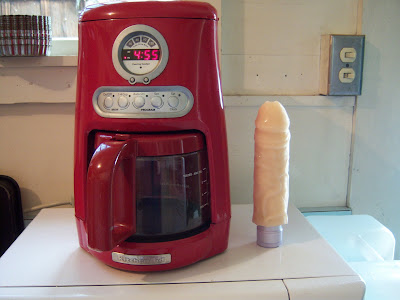 I wonder what he would have done if I had offered him some coffee?
Posted by Kristabel at 8:57 PM

That is hilarious! I'm always worried that it's going to be my mother or father that see's something like that when they are over.

At least it was a stranger you don't have to ever see him again! And he has a great story to tell his friends too! LOL

That is a very decorative little creamer bottle you got there Goddess.

What a great story.He probably thought that was tame though once he saw the spanking bench and the floggers.

Oh funny stuff there Kristabel. But you haven't seen embarrassment, until you're walked in on by one of your small children.
A whole new spin on shame ... let me tell you. And far less funny.

But the real question is, what came first, the coffee or... erm .. you?

My god- that is one nasty thing! Is Squirrel jealous?

LMAO!!!! OMG!!!! That's HILARIOUS!!!!!!!
So far, all my lovely things have stayed in the bedroom. But you never know.
And Anonymous, not CREAMER. That's called "Sugar" because it's SWEEEEEEEEET.

Thanks for stopping by, Tricia. I'm so glad Jen E'd us together. Love your blog.

Thanks for feeling my pain, everybody.

I honestly thought that was K-bel's creamer bottle. I am surprised she has put away the leather whip that came with the coffee maker, you just know she loves to whip it up into a froth.

And why...why do I believe that K-bel's sugar dispenser would be a "plug" with a little tassle hanging from it?

Please my sweet when you have a moment it is time to share with the blog world my creamer story. The world should know you are not alone
/grins

What I would be thinking about is WHO this lost stranger was on his way to visit and what stories he told when he got there. Chances are it is someone you know. LMSAO!

Very astute, Heraldo. You are correct. It's cyberskin, which I love. But the upkeep.... oy.

Thanks for being so observant.

You're right - and that's what I'm afraid of. You should hear how the gossip flies around in this valley of old ranch families. As if the moveon.org bumper sticker wasn't enough to make the tongues wag already.

Poor Kristabel! Just tell yourself he was a salesman who wouldn't be so crude as to bring up something like that with a client, darlin. It will help you to look your neighbors in the eye at the next community event. LMSAO!

What a wonderful illustration for the er climax of your story. But my imagination couldn't help but illustrate some of the other, um, minor parts, like the look on the stranger's face, LOL!!! and ... I won't go there.

Go there, Reuben. Come on. Do it. You know you want to.

Gosh Kbel ...So you're saying that what you're into here is a kind of reader participation artform then? And you're inviting me to participate in your project? With my imagination? Wow, I'm um, I'm really honored. But you should know that I'm quite inexperienced when it comes to this blogging thing ... and all the upload download coded info transfer techno savvy stuff that comes with it. Nonetheless I must say that even though I'm a 'stranger' here, so to speak, now that I've got a hang of how to move the mouse back and forth and all around and to alternate it with the touchpad --mmmm... that was delicious, thank you Kristabel. Even the coffee was good, and the chaps and the spurs and the thistle and the saddle and the horse and the phone off it's base and I especially liked that wild part about "tethered to the kitchen wall" ;)

You're welcome. But really, the pleasure's all mine. Your unbridled enthusiasm more than makes up for your inexperience.

I'm sure that given a little time and patience, I'll learn to like the bridle as much as I like the saddle, spurs, and spanking bench.

this was a wonderful story. have to thank Boy for telling me to tune in.
i will try to be by more often!

OMG...That was hilarious! But, my first thought was how trusting you are to let a stranger into your house to use the phone! I live in the country too and if someone we don't know happens by they are greeted with a Kahr, not cyberskin and coffee! LMAO

And anonymous...I don't even know what a Kahr is, but somehow it doesn't sound nearly as fun.

you are my hero...damn...that is a great coffee pot!

Look, I hate those digital coffee pots too, but that doesn't excuse someone for a rude exit after you let them use your wacky-looking peach-colored phone.