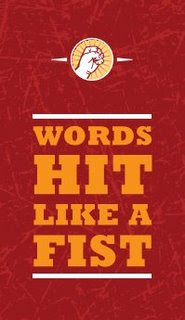 Thank you so much for bringing the phrase "never go full retard" to the world. We just don't have enough horrible and demeaning things to say, especially when talking about people with disabilities. I am pleased to see a creative genius like you at work. There's just not enough hate speech in the world. /sarcasm

No matter where you stand in the whole Tropic Thunder controversy, the fact remains that we as a society continue to not only allow, but widely accept the use of "retard" or "retarded" or "tard" when talking about people with disabilities. I hear it several times a day - from the mouths of children as well as adults, on television, on the radio. There's even a proliferation of other versions of "tard" to describe people perceived as unintelligent: Celebutard, technotard, debutard, and the list goes on.

I have a lot of friends who have disabilities. I hear their stories of being bullied, victimized, tortured and teased. I see their fallen faces when they overhear someone laugh, "You're such a retard."

My friends talk about this word often - sometimes with anger, but more often with shame. A shame, not aimed at the people who use these words or at a society that allows and even encourages them to, but a shame at their own disability. Their own difference. A shame at who they are.

There are always people who attempt to use the "it's only a word" argument. "It's only a word," they'll say. "It can only offend you if you let it." Bullshit. A study done by the International Coalition on Abuse and Disability found that over 83 percent of women with developmental disabilities have been sexually assaulted and that 50 percent have been sexually assaulted 10 or more times. Hateful words lead to hateful actions.

It's easy to talk about other people's cruelty and ignorance in private, but I've never quite known what to do when things are said in public. Do I confront the offenders and bring more attention and likely ridicule to my friends? Do I try to explain the hurtful words away and keep perpetuating the silence? Do I encourage my friends to speak up for themselves when I know that they are often so afraid of others' disapproval they won't even speak up about what they'd like for breakfast?

So I was thrilled to see these little "words hit like a fist" cards being offered from Active Gray Matter. The image on the front is the one above. The image on the back is the text below. I've got 200 coming my way, but they're giving away 10,000 more free if you'd like some of your own. I can't wait to start handing them out - and giving some to everyone I know so that they can do the same. 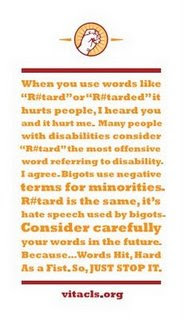 You know what is also sad, and infuriating?

These comedy gurus make that joke knowing that there are many people out there who will laugh at it.

It is one thing to make Blazing Saddles, and use it to make racism look stupid.

However, disability affects all races and cultures, and it is too bad that people are just fine with it.

I've heard that the people who made this movie claim that they were just satirizing Hollywood.

If their intent was to show that show biz people are a bunch of relentlessly self absorbed assholes then I guess they succeeded .

Lets hope that it utterly tanks at the box office

I had no plans to see this movie because it looks STUPID to me but this is just another reason to stay away.

My sister has worked with MRDD adults for over 15 years and she fights this kind of bigotry daily. Try taking a group of 4-5 mentally handicapped people anywhere without running into someone who is a total ass about it. :(

I hate these goddamned.. er, well not hate but, yuo know what i mean... SUzy thinks its a shame why it is that anyone things so little of thamselfs that they hafto pretend to themselfes that theyre better then another by using this beatiful free thing called language in such a reckless ignorent cruel damaging and dangerous way --

thanx 4 opening up ears K'bel, maybe some will even someday hear their heartsbeating --onword!

I don't get it. Just because people are "Actors" they can say whatever they please? How many "actors" have really done any good in the world? Sure, for some reason they make big bucks with their idiotic movies and give some of their earnings away to so called worthy causes. (Mostly for tax reasons, I would imagine, and the press they receive.) This movie(at least from what I have read about it and seen on u-tube) repulses me! Kudos to you, Kristabel, for letting the world know what it is really like in a lot of people's lives in communities everywhere. Even Hollywood, I am sure.

Another word I can't stand is whore
Isn't that right Suzy?

Thanks so much for the shout! We are so happy people have responded so positively! Thanks for spreading the word! Krishanna, Community Evangelist, Active Gray Matter

um 5:56 PM,
whore you to qusetion Suzy abuot what her opinion is and what wurd she thinks you maybe can or cannot stand? -- right? == but if you say so its true at least relatively speaking and but then whos Suzy to qusetion you about what you cant stand because uh ...or what i mean is ... LOL! --now you made me forget what you asked me.. -- but anyway how would Suzy know anything abuot whatever it was?

There are many forms of aggression, physical, psychological, or passive aggression, where a person might compliment you on something, only for the real intent of embarrassing you or pointing out your shortcomings.

Taking advantage of someone that can’t fight back is just plain unfair. The upside of that is most people recognize that fact, and compensate for it, forming bonds and friendships that might not have happened otherwise.

Remembering that nobody is perfect, we all have a handle on someone else to hurt them.

I have several friends that are very short, and most of the short jokes that I hear come from them. Some of their jokes are very clever, and they are very gracious when someone else teases them. So, I just assumed that they had adjusted to it well. One does not realize how close to the surface their pain is.

One of these gentlemen witnessed another person make fun of his son, who is also short. He dealt with it very well but after he took his son home he went back and explained in great experience detail why that person should never mention how short his son is ever again. He wanted his son to grow up thinking that it doesn’t make any difference, which indeed it doesn’t, unless someone points it out.

Kristabel, If I see you at the picnic, can I get a couple of those cards from you?

From Ladyfriend's and my experience, younger kids don't use that word.....it's adults and teenagers.

You are so right about the power of words and their ability to deeply hurt other people.

The question about what to do in public really is a tough one. I've let my friends know that I just won't be around any hate talk. I've dropped a number of friends because of their repeated and demeaning comments about women, jews, hispanics, lesbians, the homeless.

If I don't know the offending people then I usually just figure that they are not worth any effort I could make. If they don't know me personally, then I probably have no power to change the way they behave. I do, however, move away from them as fast as possible.

Thanks for your comments everyone.

I read that this movie is doing much poorer at the box office than expected. Also, meetings with Dreamworks and advocates for the disabled have resulted in the removal of "never go full retard" t-shirts as well as the offensive "Once upon a time there was a retard...." website. Hooray!

Eko...since it's looking more and more like the Blogger's picnic may be virtual, you might want to send me your address, and I'll throw some in the mail.

Kristabel, I actually emailed the folks and they are sending me 25 in the mail. Thanks though.

As far as a virtual blogger's picnic, over my dead body! If'n only Ernie and I show up, we'll share plenty of chicken legs together.

I remember reading a post at "Cheaper Than Therapy" (a blog by Attila the Mom who has a disabled son) and she talked about "fucktard" and variations of that were hurtful to her.
I'd never even thought of it before that.
Words are powerful and as a writer you'd think I would have known it.
Luckily, I've never liked those words.
The old standbys work for me.
But I hope Hollywood and Ben Stiller get spanked for this.