Why I will not be attending the peace march on Saturday 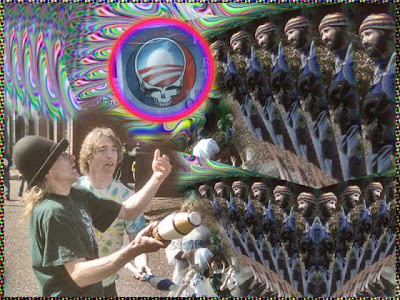 I'm all for civil disobedience. For peaceably assembling. For street theater and the Raging Grannies and Code Pink and Veterans for Peace.

But if I see one person juggling while riding a unicycle, passing out 9/11 conspiracy leaflets, spouting about global warming, picking up hot chicks or in any other way using the event as an excuse for frivolity instead of a reason to express being righteously pissed off that billions have been spent, thousands upon thousands have been killed, millions have been displaced, tens of thousands have been wounded and hundreds have killed themselves, then the likelihood that I'll end up in jail is very high.

And I look terrible in orange.

K-bel, you're so hawt when you get all ready to lock down for a righteous cause like that.

They do??? Damn. But do they still wear a jumpsuit? 'Cause that would still be unattractive.

And do you have to make me snort like that?

Yes, the blue jumpsuit. I'd call that lucky -- the men's orange is godawful.

Amen, sister. Don't people get that it's a protest not a freak show?

it is blue dear. a dark blue. and its really cold in there from what i here. sucks. besides-i don't think there's art supplies in there. unless you use tp & toothpaste?

I know the feeling about the frivolity. I do attend demonstrations as a civic duty, but I'm a bit down on them as I've expressed.

I borrowed this quote from a column on Adbusters:

We all know where this stuff comes from. Anyone who’s ever been to a lefty political meeting knows the deal – the problem is the “spirit of inclusiveness” stretched to the limits of absurdity. The post-sixties dogma that everyone’s viewpoint is legitimate, everyone‘s choice about anything (lifestyle, gender, ethnicity, even class) is valid, that’s now so totally ingrained that at every single meeting, every time some yutz gets up and starts rambling about anything, no matter how ridiculous, no one ever tells him to shut the fuck up. Next thing you know, you’ve got guys on stilts wearing mime makeup and Cat-in-the-Hat striped top-hats leading a half-million people at an anti-war rally. Why is that guy there? Because no one told him that war is a matter of life and death and that he should leave his fucking stilts at home.

Thanks so much for that as well as the link to your post Eric. That's exactly how I feel. I wish I would've read it sooner, then I just might have shown up at the rally.

With a sign saying "War is a matter of life and death. Leave your fucking stilts at home."

I have attended the peace marches in Eureka but didn't this weekend. I spent the day in my garden, enjoying beautiful mother nature. I did radiate peaceful energy and thoughts. Weeding and feeding my flowers is a peaceful activity and is "grounding".

Right on, Kristabel. The tone of "Women in Black" more aptly hammers home the solemnity of the situation than a chaotic but eye-catching street fair. Too bad the media seems to "go for the juggler" when portraying a diverse crowd, too.

However, who was it said, "If I can't dance at your revolution, I'm not coming"? Maybe organizers need to differentiate between war protests and peace celebrations.

"go for the juggler"

btw, Kristabel, u may already know this or u may be able to infer it from your sensitive feelings and intuitions but suzy just wanted to say that there is the perfect place for everything and everything falls into its perfect place every time when yr being here/now and walking on stilts and juggling in the zone --if u knowwhatimean --which btw is where Suzy is at right now LOL and im swaying, er, i mean im saying --WOW! --that photo u loaded is soooooooooooo totally dropdeadandcurluponthefloor psychodelic... its like totally visionary! ;) --LOL! Suzy gives it a 3 thumbs up, (but catch them when they come down) -- is that Jerry up in the right corner melting into a peacock feather? or tim leary? or what?!!.. OMG!! its both! LOL, i can dig it i can dig it.. .. its aart -right? --theatre, ---photoshop ... or whatever --LOL!

Maybe Suzy will read yr post later and find out more becuz i usually just look at the pictures.. & of course, read the comments --thats always the best part, no offence maam, LOL hey, speaking of whatever... whatever happened to Abby Huffman and Rubin Jerry? i havnt seen or heard much of them-them --u think maybe theyre on teh floor somewhere? ok thats not fair, im in trouble now, im swaying too far, wobbling like humptydumpty... but before i hafta go, youknow, lemme just say that Suzy sees that u r as per usual right on target with this post, its killa, totally the bomb! One thing about stilts though --its a long long fall-- so, just sayin before i do, luv, paece, help reveal the truth about 9/11, stop solar warming and/but a warm happy spring solstice to one and to --aaahhhhhhhhhhhhhhhhhhhh.......

I need a new phone, and the Iphone Nano (I have seen it in real life, my friend has it) seems tempting, but it is too cheap. Is it a rip off or not? Please if you don't know the answer, don't make up stuff just to get points.