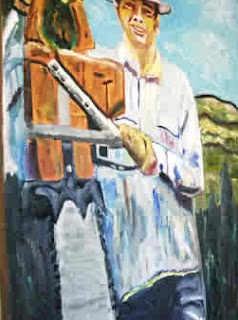 It has been brought to my attention by Squirrel that this painting was chosen as this year's winner of the juried exhibition at the Humboldt County Fair by bay area judge, Jack Toolin.

We believe that Mr. Toolin's corn dogs, funnel cakes, and luxurious weekend stay at the Fern Motel must have been funded by Roger Rodoni, John Campbell and Phil Arnot. Otherwise how can anyone explain this award while the FANTABULOUS sculpture "Elvis," by Eldrine Norris, on the anniversary of The King's death no less, was completely overlooked??!
Posted by Kristabel at 10:37 AM

In addition to being the "King of Rock and Roll" Elvis was a great American who took time off from being the number #1 pop star in the World to serve in the US Military.

If you squint your eyes it blurs it and that makes it better. I guess it captures some spirit that appealed to the judges.

Hooray!!!!! At least the people recognize true art. Thanks for the update.