Too much time on their hands 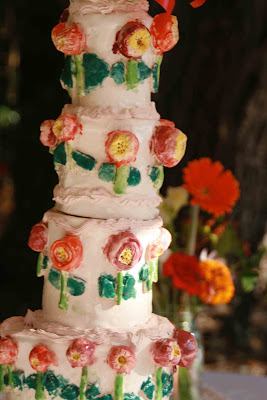 While admiring the pictures of a beautifully artful homestead on Kym's blog, I was reminded of an incident several months ago while shopping for a birthday gift in old town.

Drawn in by some pretty vintage aprons outside a small store, I went inside to search for the perfect present. This is not a store I would usually shop in as the display tables are filled with knick knacks and pastel baubles, but I was instantly drawn to the middle of the room where a huge quilt was hanging on an iron rack. Filled with color and pattern, the scraps of fabric had been pieced together in neat squares. The gifted quilt maker had then used more fabric to make hundreds of intricate small rosettes and had sewn them in place evenly all over the quilt. It was amazing. I stopped to look at it for awhile to try to take in all the detail. Not having acquired any sort of talent in sewing I am always astonished by the precision and skill it takes to create something like that.

Just then two middle-aged women walked through the door. They were chatting about how they'd never been there before but that it looked so cute through the window. I watched them walk by several displays, oohing and aahing over the trinkets made in China. As they made their way to the middle of the store, one woman noticed the quilt. She curled her lip, lifted one corner and sneered, "Well.....someone had way too much time on their hands." I looked at her incredulously.

"Too much time on their hands" has always been one of my two least favorite phrases, "You're cut off" being the other. It bothers me because people most often use it, as this woman did, to describe a work of art that is beautiful and often thought-provoking and usually awe-inspiring.

My friend Mary is an incredible sculptor. She creates huge clay vessels, some larger than her, not by throwing them on a wheel, but by building them by hand. She makes long gray coils placing them one at a time, carefully and precisely, until the vessel is the exact size and shape she wants it to be. Once it's finished, she covers it with sculptures, which she also makes by hand. Each vessel is completely different. She has one covered in aliens and flying saucers. Another is covered with little girls holding rifles. She has even made one with a likeness of me on top - with huge hands and feet in a flaming red dress to match my turquoise hair. It's one of my most prized possessions, along with the three foot tall ceramic tiered cake she made Squirrel and me when she found out we were serving cupcakes at our wedding. Each of these pieces takes Mary months of continuous work. She spends several hours everyday covered in clay and muddy water and happiness.

A man I know named Jim works over 60 hours a week and takes care of his elderly mother. He also spends almost the entire year making Christmas decorations for the outside of his house. Sometimes at 2 a.m. he can be found at the kitchen table madly wrapping empty boxes, picking out only the brightest and shiniest papers. He makes huge paper mache' candy canes, reindeer and snowmen. Sometimes for good measure he'll throw in a baby Jesus. By mid-December his home is covered with everything he's created. Hundreds of packages reflecting the multi-colored lights strung everywhere are attached to the sides of his house. Giant candy canes line the eaves. A glitter-covered Jesus lies in a flood light shining on an alcove above the porch. It is a sight that is gaudy and garish and hilarious and absolutely breathtaking.

To describe Mary or Jim, just like the quilt maker, as having too much time on their hands is not only an insult; it is also completely untrue.

When you are an artist, creating is never about having too much free time. Artists are compelled to create, and so whatever it is - painting, gardening, writing, singing, sculpting, playing the guitar, drawing, cooking, dancing, and even blogging - that makes some sort of pause in life's drudgery, you will always attempt to do it in whatever way and time and place you can, even if it's not ideal or practical or hardly ever possible, because you have to in order to be able to breathe.

I hope one day when she least expects it, she comes upon another piece of art or hears a song or really listens to the wild-eyed man on the corner reciting poetry to himself - and that it makes her catch her breath and her eyes fill with tears and she realizes that the people who she considered to have too much time on their hands are really the ones making the world a more colorful, more interesting and definitely more wonderful place to be.
Posted by Kristabel at 5:36 PM

I especially love: "When you are an artist, creating is never about having too much free time. Artists are compelled to create, and so whatever it is - painting, gardening, writing, singing, sculpting, playing the guitar, drawing, cooking, dancing, and even blogging - that makes some sort of pause in life's drudgery, you will always attempt to do it in whatever way and time and place you can, even if it's not ideal or practical or hardly ever possible, because you have to in order to be able to breathe."

You know Kristabel,I hear crap sort of like that every time I hit Arts Alive.Sometimes it pisses me off,and other times I just roll my eyes.
Really nice post.

Whenever somebody pours love into something, it has a beauty even if it's not for me.

Beautifully written sista. The quilt sounds amazing. Why didn't you buy it??? Did Squirrel "cut off" your cash flow?

*nods* That's right. I stared at my best friend once when I showed her a very intricate but beautiful video on YouTube. She said pretty much the same thing.
So I showed her how I made a book trailer.
Shut her right up. It's HARD. Whatever the "art" who am I to say its value to humanity?
I am grateful for those who sing, those who write, those who DREAM. They are the carriers of our culture.
Thanks for this post. It reminds me to be VERY careful about what I think it "worthy".

I'm going to make my wife read this one. More time has slipped through her hands than anyone I know. I've never seen the woman just sit, she's always creating something with her hands. I don't think that there is any artsy-crafty thing that she hasn't done.

Jealously is the likliest explanation. I think hyper-critical people often presume EVERYONE is like them so are afraid to try anything new.

Pity the person who doesn't have a craft that inspires them to sit and spend "too much time". I knew a quilter (I met her at a ceramics class....)that did beautiful work. I commented that I envied her skill but didn't have the patience. She laughed at me and pointed out my counted-crosstitch shirt that she said SHE didn't have the patience for. I'm grateful that I have things in my life worth wasting time on.

Jennifer knows of what she speaks with a house full of gifted artists, especially her husband whose work I greatly admire.

The sacrifices that busy people make in their lives to have "too much time on their hands" in order to create beauty should be applauded, not criticized. That snotty woman has probably never created anything but more garbage for the landfill.

Beautiful Goddess, you should have used an Interjection on those snobs!

The accusatory "too much time on your hands" has always been one of my least favorite phrases, too. The other one is, "I don't care". Both raise my ire... unless, of course, I really don't care.
Those women obviously don't know what it's like to be passion-driven. Too bad for them.

There untalented undriven people. they dont like it so they think its silly, where as someone with some talent up there sleves would respect it for what it is, an expression of the persons soul. blood sweat and tears go into what ever your making and it will show.

i found your blog through a link on reuben sorensen's and just had to tell you that reading your posts will now be a regular part of my routine because i have too much time on my hands to not stop and read someone who totally "gets" it. peace.
k

That's one of the nicest compliments I've ever received. Thanks. And welcome.