I also heart being tagged.

Really. I know some people think it's a pain in the ass but grudgingly play along. Others won't play at all. But I love discovering things about people - especially if they're really weird. The things, not the people. No, the people too. You know what I'm saying.

Indie over at the Bitten Apple tagged me. The instructions are to post the sixth photo of your sixth folder, then tell the story behind it. 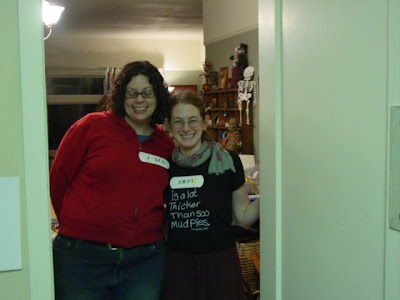 These are my friends Julia and Angie. Aren't they cute? Yes, those really are name tags made from maxi pads on their shirts. We belong to a little group called "Not Yo Mama's Craft Nite." About once a month or so we get together for eating, drinking, kvetching and, of course, crafting. This picture was the product of a few too many lemon sorbet martinis. Mmmmmmm. My mouth is watering just thinking about them. I believe Julia's just about to hold the knitting needles she's hiding behind her back up to Angie's throat to threaten the last martini away from her. We're a tough bunch.

The group's been on hiatus for awhile, but we're going to regroup in March and are looking for new members. If you've got a crafty side and are interested (Indie, Monica, Carol, Beachcomber...?), shoot me an email for an invitation. It's a great time.

Hank (Sorry, Hank. It was so fascinating the last time I tagged you, I just had to do it again.)

and another Jen
Posted by Kristabel at 10:28 AM

Labels: big tagging love, crafts, not yo mama's craft nite, tag you're it

And a craft night is exactly the kind of thing my heart desires right now. Please invite me! I have been crocheting, beading and scrapbooking in isolation for too long. It would be so nice to have a get-together, meet people, laugh!

Julia's just about to hold the knitting needles she's hiding behind her back up to Angie's throat to threaten the last martini away from her.

Is that where those skeletons in the backgruond came from? --just witch kinda kraft are you knotmamas into... anyway? Down here in SoHum we're differant... We're all nice pasifists and mellow and everything. It seems like you could of

Whoooops! My bad! Suzy didn't mean that... i can still have my turn on the bench cant i? Please... pretty please...

I'l come, but I will need a designated driver.

I have a box full of unfinished projects. I am sure I am not alone. Maybe we could open a store called the Unfinished Project.

Carol, I'm laughing at the idea of a store called the Unfinished Project!

Suzy....yikes! That's one crafting project gone very, very wrong. I'll forgive you for the "could of" just this once. You look good on the bench.

Carol...I think all of us have one of those boxes. Or closets. Or entire rooms.