I know it's not Monday, but Marshmallow Tuesday just doesn't have the same ring to it.

Some of you, based on a few emails I've received, have been waiting with bated sugary breath for a new marshmallow experiment. For the record, I said I'd try a new one every week or so. To me, this means every 1 - 3 weeks. Any longer than that and it would be every month or so. Thank you for your patience and your fabulous marshmallow ideas.

I had originally planned to make dulce de leche marshmallows but wasn't sure how exactly to do it. Then Carson Park Ranger left a comment about filled churros in Chile that got me inspired. I decided I'd make marshmallows flavored with strong Mexican vanilla, fill them with dulce de leche and coat them in a sugar/cinnamon topping to mimic the churros. So now I give you:

First you need to make the dulce de leche, which is really easy. All you do is take a can of sweetened condensed milk, remove the label and stick it in a pot of water. Make sure the water covers the can completely. Boil this for 3-4 hours (It will be runny at 3, fairly firm at 4.) You'll need to keep adding water to keep the can covered as it boils off. Let it cool. Open it up and....voila! Yummy, milky, sweet caramel. Some people will tell you that you should poke a hole in the can before boiling it so it doesn't explode. Just ignore this alarmist talk. The hole just makes you have to cook it a lot longer. It'll be fine. Trust me. 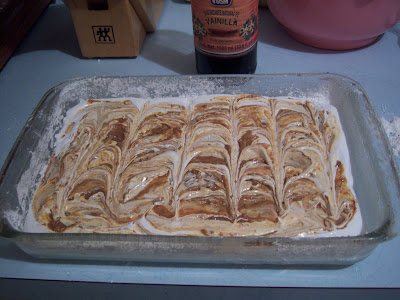 Then put the rest of the marshmallow goop on top of that and smooth it out. Then comes your real decision: The marshmallow or the dulce de leche. Which to lick first?

Let the pan sit uncovered for eight hours, then gently flip it over onto your work surface spread with powdered sugar and cornstarch. Cut it into strips and then cut those into cubes.

This picture might give you pause to indulge in a delectable little fantasy about being the dulce de leche filling in a Heraldo/Carson Park Ranger marshmallow. Or maybe that's just me. Add a little cinnamon to your powdered sugar/cornstarch mixture, stir and coat your marshmallows. They're certainly not the prettiest things in the world, but they totally make up for it in taste. 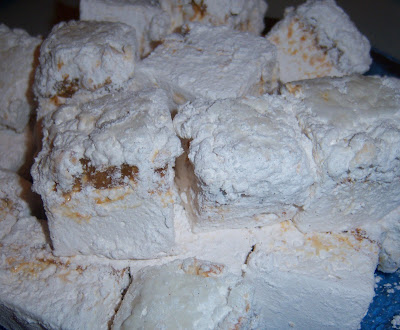 Here are a few comments from my favorite random taste testers:

Anonymous Taste Tester #2: "These are unbelievable."

Curmudgeonly Work Taste Tester: "These are...interesting." (as she grabs two more and shoves them in her mouth)

Posted by Kristabel at 8:30 PM

Pure, shameless decadence. Boil the can for 3-4 hours?

Does this mean we won't be having Dulce de Leche Filled Marshmallows after the petro-collapse?

Turn it off, Heraldo. Just turn it off.

No wonder our dinner dates never get to dessert.

Well, you would lose some of those 500 pounds when your arms were removed by the machete.

You need to be spanked you bad, bad girl!

For any particular reason, Jane? And is that an offer?

OMG! A little girl on girl action? Well, somebody should spank K-Bel.

I gained 2 lbs. just looking at those marshmallows, Kristabel! Besides, everyone needs a little spanking occasionally.

Nyborg, are you making an offer too?

I love you guys.

NYBORG! Harriet is reading these blogs. Besides you should be fearing the machete!

Harriet does not have a machete. Besides, I believe that Jane has more than graciously volunteered to do the spanking. I was just willing to watch. Maybe?

Who is going to spank Jane?

Your site isn't posting my name.

OH. My. GOD. Those look AWESOME.
Almost as good as the hot men I have on my blog today.
Almost.
I licked the screen for your blog post too.

I think that Jane and I should share the spanking duties. Those things must have so much sugar in them that they'd turn me into a spanking machine after eating just one.

Break out the steel spanking bench with leather top. I doubt it ever collects much dust at K-bel's home.

I make an innocent little post about marshmallows and this is what happens.

Uh huh,I'm sure those marshmallows were made in very close vicinity to your coffee pot.

Hey mresquan...that gives me a great idea for molded marshmallows....

Hi Kristabel,
Is there any way you could post the recipe so that I could print it out? I really want to try it. Thanks!

You're killing me with these Marshmallows! I would have had my stomach rearranged so I can't eat sugar without getting deathly ill! UGHHHHHHHHHH

Can you make these Sugar Free? LMAO I may have to experiment once of these days.

I found a great recipe for "Inside-Out German Chocolate Cake" that also involves cooking the condensed milk inside the can (for the filling, before you add coconut and pecans to it... OMG). And yes, David freaked when he saw me boiling a can. He was convinced that he would have the worst kitchen cleanup job EVER. Quite alarmist.

There are multiple uses for cooked condensed milk, not all of which involve baked goods. Unless the word "baked" is being used to describe something other than food cooked in an oven...

There are multiple uses for cooked condensed milk, not all of which involve baked goods.

CHOCOLATE MAGIC SHELL WORKS GREAT FOR DRIZZLING ON BODY PARTS TOO...HMM, THE TWO TOGETHER WOULD BE QUITE INTERESTING. ONE GETS HARD AND IT WOULD SORT OF LOOK LIKE A BLACK AND WHITE COOKIE.

(SORRY FOR ALL CAPS. COULDN'T POST IN LOWER CASE AT ALL)

That magic shell stuff scares me. Anything that starts out soft but gets hard that fast is just...

Sorry for the loss of your beloved cat.
I was telling my Mom about your Marshmallows and she said it sounds just like the homemade divinity (sp) she used to make, but not whipped. Now I have lost my train of thought...

dude. I am SO going to make those. thanks!!