My friend Wren throws a great party, and Wednesday's little debate get-together was no exception.

She had beautiful floral decorations on the table. 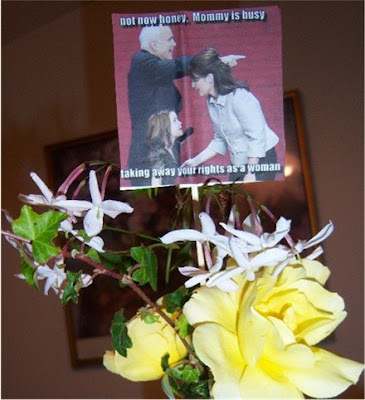 The rooms in her house were glowing with candlelight, and she brought out one of her most prized home decor accessories, dressed up for the occasion. We called her Sarahquin. 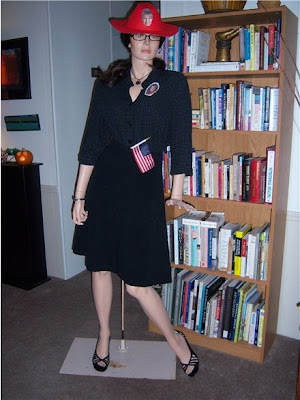 Of course, the most important thing was the food. We were all asked to contribute by bringing some sort of food or drink item from Alaska - open to interpretation. This was a rather spontaneous party, so I just didn't have time to make the Baked Alaska I really wanted to bring for dessert. I decided on bear claws instead. 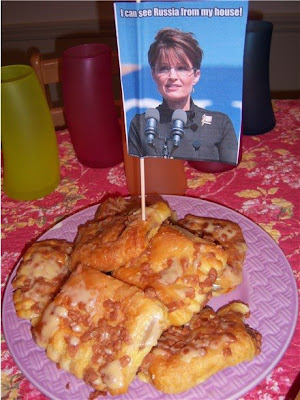 There was also wild salmon dip, 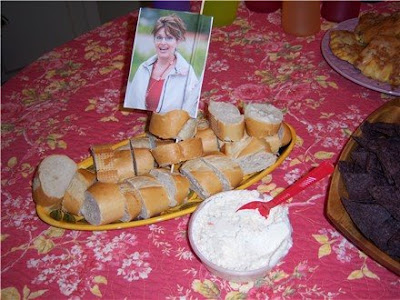 several things that needed to be killed in order to eat them, 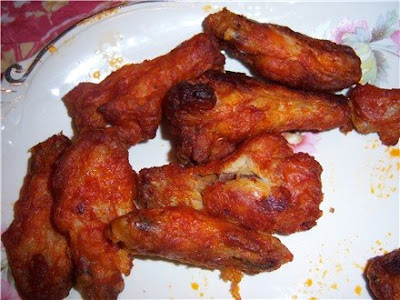 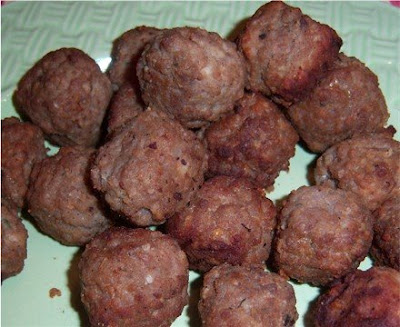 as well as chocolate moose cake. 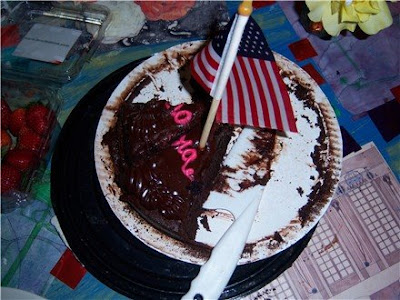 As the wine flowed, the food disappeared, and the wine flowed some more, Sarahquin mysteriously began to participate in the debate herself. Her best answer:

"Darfur? Well, gosh, I know I'm not going to be very popular with some people for saying this, but in Alaska we have to wear fur sometimes. It's really cold, doggoneit."

Then she winked, and we hugged her and told her it would all be okay.

Thanks for the party, Wren. Good times, good times.
Posted by Kristabel at 11:30 AM

Labels: Alaskan foods, flirtation as a debate tactic, hockey moms, Oh Sarah, what does the vice president do anyway?

Well, I'll be gall darned. You mean every woman in the good ol' US of A isn't burning -- er, tightening -- her bra in support of Sarah Palin?

I hope the naughty Sarahquin didn't contaminate any spanking benches which may have been intended for the much naughtier Ms.Kristabel.Looks like a good time,but did you burn any of her most hated novels?

It's amazing how some people have been surprised that women can actually think for themselves and many are not willing to vote for someone - especially someone like Palin - merely because she has a vagina.

All American women should have taken heart last Thursday when Governor Palin recited from her Cliff's Notes cram session while winking and smiling at the same time.

Your friends are hot.

Sarah Palin has a vagina? Oh, my!