I love the Academy Awards.

I know, I know...a bunch of self-indulgent egomaniacs congratulating themselves, etc., etc. But I can't help it. I love them, and I was so excited yesterday when I was able to talk the owners of a giant high-definition television into letting me spend the evening reveling in the sparkly pretentiousness.

But this year my heart felt like a wine-stained and wrinkled evening gown in that horrible grey color everyone was wearing when I saw the winner of the Jean Hersholt Humanitarian Award, Jerry Lewis. And I just have one thing to ask the Academy:

Are you fucking kidding me?

Here's what Mike Ervin had to say about it in The Progressive. 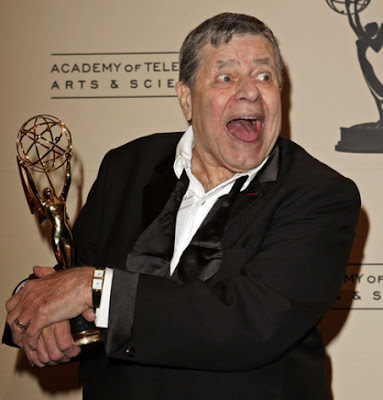 The Oscars are about to insult people with disabilities.

At the Academy Awards ceremony Feb. 22, the board of governors of the Academy of Motion Picture Arts & Sciences will present its Jean Hersholt Humanitarian Award to Jerry Lewis.

Lewis is notorious for making disparaging remarks about others, particularly gay people and women.

But he has said equally degrading things about people with disabilities.

For decades, disability rights activists have criticized how his annual telethon for the Muscular Dystrophy Association exploits people with disabilities by making us into objects of pity.

To this, Lewis responded in 2001, “You don’t want to be pitied because you’re a cripple in a wheelchair, stay in your house!”

Lewis becomes particularly enraged when those who protest against his telethon and him are people with muscular dystrophy — like me.

In a 1993 article in Vanity Fair magazine, he said about me, “This one kid in Chicago would have passed through this life and never had the opportunity to be acknowledged by anybody, but he found out that by being a dissident he gets picked up in a limo by a television station.”

The damage Lewis has done to the disability community goes far beyond name-calling. He and his telethon symbolize an antiquated and destructive 1950s charity mentality.

This says that people with disabilities have no hope and nothing to offer unless we are cured, so the whole focus should be raising money for behemoth charities that can find that cure.

This is a dangerously simplistic outlook.

It devalues and dehumanizes people with disabilities by suggesting we can be worthy contributors only if we first shed our disabilities.

It gives people permission to avoid addressing the daunting task of creating an inclusive society if they simply make an annual contribution to Jerry.

Disability rights activists still fight daily to shatter the barriers that exclude and segregate people with disabilities. Those barriers are rooted in the outmoded charity mentality.

Lewis and his telethon are the primary force that perpetuates that mentality.

By giving Lewis this honor, the board of governors of the Academy shows that its view of people with disabilities and our potential has not evolved in 50 years.

Not to miss the point or anything, but what IS up with that horrible grey? A just looked through the Best Dressed and the Worst Dressed Lists and frankly could not tell the difference.

I've never liked Jerry and always found his telethons distasteful, but I never really thought about why -- this helps explain it.
Seeing his blessedly short speech last night, where his voice seemed slow and halting, I wondered if he's bordering on disability himself. Did he have a stroke or something?

He even includes gay slurs during the telethon. Classy.

Hope none of "Jerry's kids" are queer.

queer hmm i dunno but one of his kids was i guess once a famous playboy :/

I didn't know Jerry Lewis was still alive. What about Jerry Lee Lewis? Is he still alive?

Kristabel, perhaps you should send your post to the board of governors of the Academy.

I didn't know Jerry Lewis was still alive. What about Jerry Lee Lewis? Is he still alive?

Kristabel, perhaps you should send your post to the board of governors of the Academy.

Indie, I don't know! The trend this year seemed to be dress color matching skin color...and both seemed to be a half-dead grey. Blech.

Bob, Lewis has had many health problems including heart attacks and lung fibrosis, but I'm not sure if he's had a stroke.

Heraldo, here's one of my favorite Jerry Lewis quotes:

"I don't like any female comedians. A woman doing comedy doesn't offend me, but sets me back a bit. I, as a viewer, have trouble with it. I think of her as a producing machine that brings babies in the world."

It was also pretty great when he called cricket a "fag game."

He's such an asshole.

Thanks for hitting the nail on the head with that freak; he's bugged the hell out of me for twenty years. I especially appreciated what you said about viewing "disabled" people only within the framework of accepted wellness (even the language references it). That really rang true. I have friends and relatives in states of health that are never going to be "cured" or "healed"; they are still whole people, with depth, insights and significant contributions to give.

Exactly, Kato. I can't take credit for the words, though. They belong to Mike Ervin, who's an incredible writer and activist.

Jerry Lewis is unctuous and repulsive. His face-making and pathetic, silly noises always made me feel sorry for him, but his fundraising made it difficult to criticize him.

I heard an interview with him a few days ago on NPR, and he came off as a self-indulged, arrogant, superficial crybaby.

But that's just my opinion.

There isn't much evidence to support the assertion.

Well, I've always had difficulties with him for reasons that I couldn't quite explain, but Mr. Ervin did so beautifully.

His speech at the Oscars was short, his interviews before the ceremony indicated that he's an egotistical, self-serving ass who thinks he "deserved it" a long time ago, and apparently, his behavior at the after-party was pretty horrendous.

On another note, Jerry LEE Lewis is still alive. In fact, he performed onstage with Little Richard at last year's Grammys. The contrast between the two was pretty marked: Jerry Lee has aged a lot and virtually all of his energy was in his hands, playing the piano, whereas Little Richard is still as manic as ever.

I understand that Jerry Lee was also, once upon a time, one hell of a racist son-of-a-bitch. Perhaps he has mended his ways?