The following is a guest post by my little brother Troy who moved to New York City about ten years ago. And who doesn't call his big sister often enough.

Troy and I share many things, and our mutual love of all things Chinatown is near the top of the list. Neither one of us can imagine being friends with anyone who doesn't appreciate the sights and sounds and smells and tastes of these little cities within cities.

One of my favorite memories of Troy is when we both lived in San Francisco in the early nineties. One Saturday night Troy was almost finished causing general mischief and consuming so much beer that I can feel my liver twitching just thinking about it. He was starving. If you've ever been drunk and famished at 2:30 a.m. in The City, you know that food options are few and far between at that time. As he weaved down the sidewalks grumbling and madly trying to find something - anything - to eat, he happened to find himself on a fairly deserted street in the middle of Chinatown. Most of the street was dark, but about 30 feet ahead of him was a bright light spilling out onto the sidewalk from a little shop. He walked closer, and just like a mirage in the desert, the glowing window appeared before him holding exactly what he had been yearning for: succulent, shiny Peking ducks hanging by their necks from the ceiling. He rushed through the door, slammed his money down, waited impatiently while the man behind the counter cut the string from his duck, ripped off a leg and took a gigantic bite. His eyes glazed over in ecstasy. There was nowhere to sit, but he didn't care. Mumbling a thank you through his full mouth to the shopkeeper, he headed back out into the night. Troy spent the next hour walking around San Francisco ravenously eating that duck, brown glaze dripping from his mouth and fingers.

But wait. In my bossy, eldest sibling kind of way I've forgotten that this is Troy's post, not mine. Anyway, here's what Troy sent me today. He had jury duty. In Chinatown, as luck would have it. 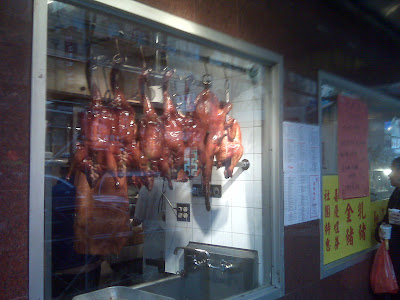 11:45 a.m. This is where I had lunch today. So dirty and so cheap! I knew I was in the right place when I walked in and was the only white guy there. I ordered chicken and stringbeans and some pork dumplings. I got beef with egg and broccoli. I didn't care and ate the whole thing. 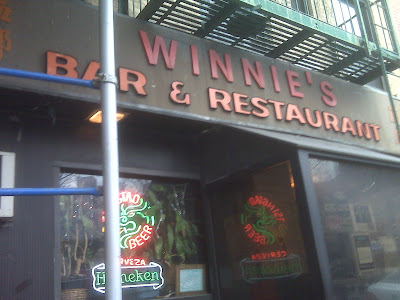 12:30 p.m. Then on to this place for a quick beer (maybe 2) before heading back to jury duty. It was me, three Chinese guys, all somewhere between 75 and 300 years old, a Chinese hooker, and what I believe to be a homeless dude curled up in the corner. I made small talk with the hooker, but I don't think she really understood me. She seemed surprised when I left. Goddamn I love Chinatown.

Maybe I'll get picked for a trial and can hang out here for a couple more days!

It sounds like you and your brother are close. Sweet.

As I sit in Midtown hell, gazing out the window in the hopes of seeing yet another near miss yellow cab running over a tourist as they wander into the street, mesmerized by all the tall buildings, I miss Chinatown hookers already. Thanks for not telling the part of that story when I woke up the next morning in a kinda strange bed covered in ants. Ants must really love sticky sweet duck juice...who knew?

Aaaaaw. See why I miss him?

Sounds like he's got the soul of a true adventurer, enjoying what gets delivered, regardless.

I am telling tyour parents!

I was going to say maybe you should be glad he doesn't call you much!!! LOL (You know, for bail, blackmail money, stuff like that.) LOL.

He sounds like fun. No wonder you miss him.

Ahhh Tro-bro, my other brother, I remember Friend telling me that story... Memories