I love Tuesdays. Not only does Tuesday mean that it's not Monday anymore, but the Farmers' Market comes to Old Town. And not only does the Farmers' Market come to Old Town, but Los Bagels is now open on Tuesday so I can grab an egg salad on a salt bagel while trying to balance the plethora of multicolored veggies hanging off my arms because I've forgotten a basket to carry them in once again.

Yesterday I wandered up the alley toward F street in search of some big beautiful beets. I found them next to a big beautiful beet farmer and paid my $6 for a couple of bunches. Then I went looking for fava beans, but before I could find them I was distracted by a little table full of gorgeous ripe peaches. Could it really be? Yes, the first of the Willow Creek peaches have hit the market. Forgetting all about the fava beans, I spent the rest of my cash on heaven scented French white peaches.

I hurried back to my office and showed them off to my co-workers excitedly, who oohed and aahed in appropriate admiration. "What will you do with them?" one asked.

I paused as peach visions danced in my head. What would I do with them? Bake them in a pie? Slice them and eat them over ice cream? Leave them whole and eat them slowly with the juice running down my arms while sitting naked in the sun? I told them my plan.

"I'm going to make a peach arugula pizza for dinner."

They looked at me in silence as if I had said I was going to make stray kitten pizza. I didn't understand the horror. People put pineapple on pizzas, why not peaches?

So that's what I did. And it was delicious. 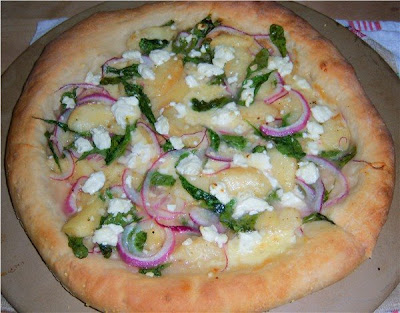 I used Tomaso's dough from the Co-op. I like to make dough from scratch, but sometimes I'm lazy, and Tomaso's is cheap and good. I sprinkled some cornmeal on the pizza stone, rolled out the dough and poked it all over with a fork. Then I put it in the oven at 450 degrees for about 10 minutes.

Meanwhile, I cut up three peaches, thinly sliced half a red onion and minced two cloves of garlic. I put these in a bowl with a handful of arugula and tossed them with olive oil, salt and freshly ground pepper.

After the crust came out of the oven I grated some fontina cheese on top then sprinkled on the peach mixture. I then crumbled some Cypress Grove chevre over the top. I can't think of anything that isn't made better with a sprinkling of CG chevre.

Then it went back into the oven for 10 minutes, until the cheese melted and it looked all toasty and golden brown.

It may sound a little strange, but the flavors taste really nice together. The sweet peaches pair well with the spicy arugula and tangy goat cheese. The recipe needs work, though. I think next time I would have doubled the arugula and used more salt and goat cheese. The peaches were really juicy, so the pizza dough needs to be pretty thick in order to not get soggy. I rolled the dough too thin.

I told Big Hands of my critique and asked him what he thought would make it better for next time. He sat in thought, slowly chewing his pizza for a few minutes before answering.

"I thought it was perfect. The only thing that would have been better is if you were topless while you made it."

He's a smart man with a lot of homemade pizza in his future.
Posted by Kristabel at 8:13 PM

Yummmmm.....these big hands rub themselves together when seeing juicy peach juice run off of your chin,and down your neck,and down to your.........mmmmmmmm

very cewl juxtaposition of produce, but some of us simply dont have enough time on our little hands to roll dough --so as a compromise, Suzy tried pouring some half n half over a nice bowl of peaches and onions . . .

it looked really really pretty with the colors and textures all blending together. In fact everything worked out quite well, but there was one small problem --it wasnt edible. Do yuo think maybe its cuz i didnt use Willa Crick peaches?

Suzy, now try the same recipe but this time make sure you're topless. If that doesn't improve the flavor try completely naked.

Hey Longpole, Suzys got nice peaches ;) And i'd be willing to give your recipe a try but i think i might need someone to give me a hands on lesson or something.

I love you, suzy.

I've had tomato ice cream, but peach pizza sounds even more summery. What next? More recipes for happy and handy home-makers, please! Pretty please, with peaches and cream on top?

SUPER impressive!!! i love incorporating fruit into a main course. i do this a lot with mango, and sometimes apples, but peaches...ohhhh. you're a genius.

There's something odd about Suzy's recipe. Perhaps if she took out the onions. Yeah, that's the ticket, remove the onions. Try garlic instead.

Tomato ice cream...I can't quite wrap my taste buds around that.