At the edge of the Ukiah Valley Cemetery, there is what appears to be a large parking lot. Composed of dirt and gravel, it stretches nearly 100 yards before the ground breaks into well-cared for headstones placed carefully with flowers and memorabilia. Only it isn't a parking lot. 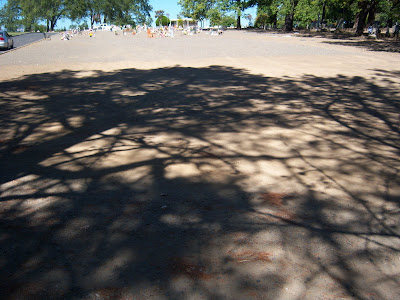 It is a mass grave where 433 people with disabilities have been buried. Buried and forgotten. Unmarked and unnamed.

On Monday, September 21, I was fortunate to be able to attend the seventh annual Day of Remembrance coordinated by the California Memorial Project. A collaboration between several California agencies, the purpose of the project is to remember and honor over 45,000 people who died and were buried in mass and unmarked graves in state hospitals and developmental centers.

Led by people with disabilities, a number of whom have lived in state institutions, the project is an enormous act of advocacy - they are reclaiming and healing their shared history by honoring those before them. They are achieving this by restoring the cemeteries at the state institutions, recording the stories of people who lived in them by decade, and documenting the history of the client/survivor movement in California.

After an opening ceremony at the mass grave site, we were led into the heart of the cemetery to another, much smaller, unmarked grave. People attending were then given the opportunity to share their stories and remembrances.

Some spoke with obvious pain about their own experiences of living in an institution. One woman was committed when she was fifteen because "in those days your parents didn't have to have a reason. They could just put you in there if they were tired of you." She talked about being abused by staff people and witnessing a murder. Others spoke about the horrific experiences of their family members.

Some read poems and others sang songs. 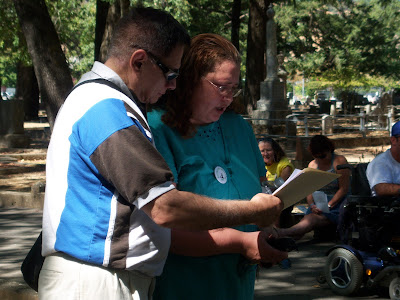 Undeserved confinement,
Someone's Grandpa
Sitting in a chair,
Watching birds sitting in a tree...
Lost lonely souls,
Souls not as lost as presumed,
Touched by the light of the universe.

One man said that he had survived over 140 shock therapy treatments. "One day I saw a little girl get killed right before my eyes. It wasn't right. I tried to talk to someone about it - to tell them it shouldn't have happened. I was mad. That was when they took me for my first shock treatment. After that, every time I spoke out about something - anything - I got another shock treatment. Before I went in the state hospital, I could read and write. I can't read and write anymore. " 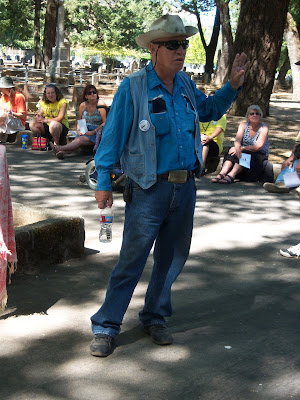 "But I'm one of the lucky ones. I got out, and I'm still alive." He swept his arm in the air across the empty plot of land in front of us. A plot where 1660 people with disabilities had been cremated and buried. Buried and forgotten. Unmarked and unnamed. 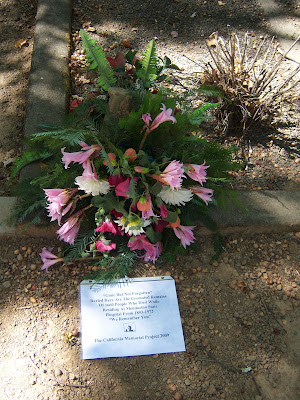 Posted by Kristabel at 4:28 PM

Wow, thanks for posting this. The sad thing is there's only one mental hospital in this county, Sempervirens, and it's run like a prison instead of a place for sick people. I'm still coping with the after effects of shock therapy. Nowadays it's a lot better than it was in the 60s/70s, but the side effects are still fierce!

Thank you, Kristabel, for once again enlightening me about something that is kept in the shadows. Very tragic history so close by.

Wow. I had no idea such a place existed. Thanks for posting this. It's a reminder that some people's struggles are ignored and invisible.

Once again, beautiful written. Kristabel, thank you for this. Mental illness writhes throughout society. We've ignored it and the people who have it too long.

it's impossible to read this and not be moved emotionally. thank you.

Thank you for the knowledge. I never heard about this before. I am glad you were able to attend.

What a great post. Thank you!
I didn't realize there were mass graves.

This is such an important story to tell and you told it so well.

I think it is very easy for us to forget there is a world beyond our own little spheres. Thank you so much for sharing.

I am glad that you are in the world and not afraid to take a stand for those who cannot. Thank you.