My wife and I attended a wedding last weekend in a small town in Wisconsin. A few hours to kill before the wedding found us driving around looking at the fall foliage, drinking cider and enjoying some time completely unscheduled without the kids.

To my delight, we found ourselves smack- dab in the middle of a Columbus Day Weekend street fair and carnival. Wandering around listening to locals argue about which is a better mascot, a Packer or a Bear, sampling endless supplies of free cheese and listening to high school cheerleaders rattle off cheers and chants about the dogs and bratwurst they were peddling at their fundraising stand, I ran into this beauty of a sign: 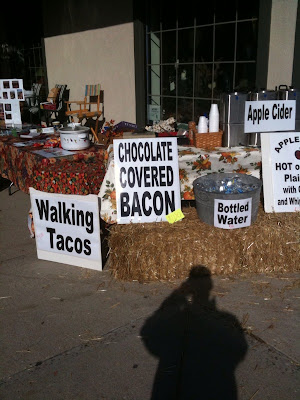 Knowing my love of Mexican food, you can imagine my eye was first drawn to the "taco" portion of the sign. Walking tacos no less, whatever the hell that might be...I immediately inquired. I expected them to be wrapped in foil. As this was a street fair, I assumed it would allow one to walk around with said tacos. I was wrong. You see in Wisconsin, walking tacos refers to the meat in the tacos. Anything that used to walk can be put in them. In this case it was pig (yes, the guy said pig and not pork,) and chicken. Apparently cow and bull had been sold out by the time I got there.

Two chickens and a pig later, my attention was drawn to bacon...chocolate covered bacon! What, are you kidding me? Two of the most wonderful treats in the world, finally dating long enough to have offspring.

As you can imagine, the young lass that accompanied me to this fair had stayed at this stand long enough to be polite and hear the history of walking tacos, but at this point had had enough and wandered off to look at more exciting local handicrafts such as wooden spoon kitchen witches, doilies and such.

Jim, the corn fed gent that walked me through the taco talk, pointed to the sign just as I was finishing up chicken #2. Mouth full, I gave him a head nod, and held up three fingers. Jim took three slices of raw bacon, dipped each into a vat of melted chocolate, and let them cool for just long enough to make sure the chocolate stuck to every inch. Transfer to the even bigger vat of hot oil was smooth. A couple of minutes later, I was in heaven...pig and chocolate heaven.

And I thought the only thing I was really going to like in Wisconsin was the cheese. So happy to be wrong about that!
Posted by ny little bro at 9:41 AM

sounds lovely, i think i heard somewheres that Wisconsin is a lot like Fortuna..

Walking tacos are my favorite. Much tastier than swimming tacos and slithering tacos, and um... scurrying tacos.

Wasn't Chocolate Covered Bacon the original idea for the name of this blog???

Anyway... It appears Fondue Parties everywhere have found a new treat to "dip".

I can just imagine the delight my dear friend Pops will take in hearing this news!

Chocolate Covered Bacon is an abomination!

Not to mention, it's not kosher.
Uggggh.

tad is in jail on hunger strike
theplazoid.wordpress.com