Are you there, vodka? It's me, Kristabel.

This year Dad and Mama Xanax are spending the holidays with my brother and his family in New York. When they told me a couple of months ago, I knew I would miss them, but that it would mean a different sort of Christmas for me. No obligatory family events, no shopping stress, no oven-slaving, no fake cheer. I revelled in the thought of the fabulous Un-Christmas I was going to have.

Then I realized that it also meant a holiday without Mama Xanax's pecan pie. This would have to be remedied. Unfortunately I have a little pie issue. No matter how hard I try, I cannot make a decent pie crust. If it's not so tough it's unchewable, it's so flaky it falls apart during the rolling, and I end up piecing it together in the pan, and then the filling seeps out the bottom making everything a soggy mess. I've tried every recipe I can find, including the nasty no-fail vinegar crust. I've asked every expert pie maker I know for tips. I've watched others make them. I've read books. I've watched videos. And always failing, I have resorted to buying pre-made crust, which although it holds together, is really thin and awful tasting.

So it was with great skepticism that I read the rave reviews for a pie crust developed by Cook's Illustrated using vodka. Something about gluten not forming in vodka which keeps the dough moist and flaky...blah blah science stuff blah... But then I thought about my own life, and how vodka has often been the answer to a variety of problems. Why not pie crust? So I decided to try it.

Here are the ingredients: flour, salt, very cold unsalted butter, very cold shortening, sugar and vodka. Oh, and ice water. That's not in the picture. Sorry. Some people like to use all butter. Some people like to use all shortening (although why you'd want to do that and not have that sublime butter flavor is beyond me, and we're not even going to talk about that disgusting butter-flavored shortening.) I'm pretty sure you can do whatever you want; I just decided to follow the recipe this time. Mix the flour, salt and sugar in a bowl. 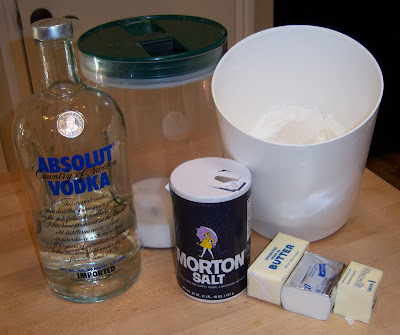 Cut the butter and shortening into little cubes. If you use a food processor like the recipe in the link says, your cubes don't have to be quite as small. I like to do it the old fashioned way so I can pretend I'm Laura Ingalls Wilder. Except now I'm most likely old enough to be Ma Wilder. Sob. 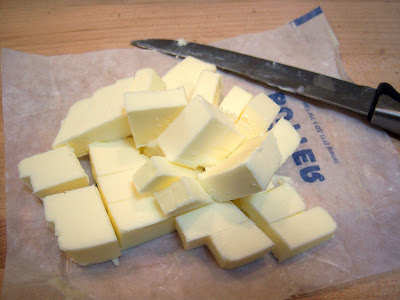 Use a pastry blender or two knives to start cutting up the cubes of fat and mixing them with the flour mixture. 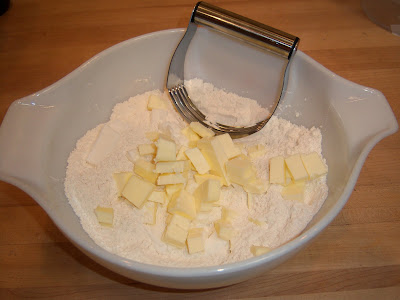 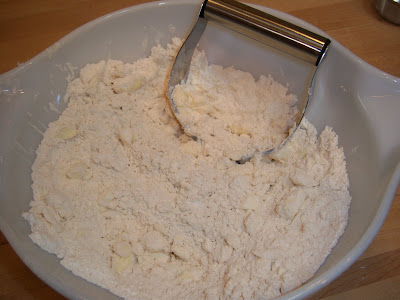 Keep blending and cutting until the mixture looks like yellowish cottage cheese. I realize that doesn't sound very appetizing, so just bend over and smell the butter. Then sprinkle the vodka and the water over the top of the dough. 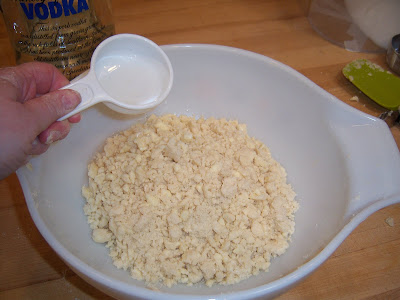 Use a spatula to mix it all together. Now bend over and smell the vodka. Really I just like telling you to bend over. 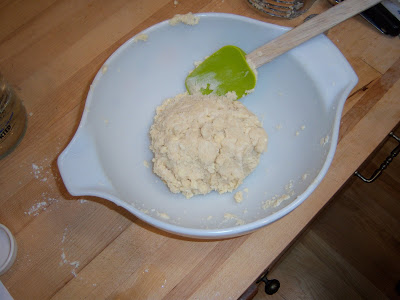 Then use your hands to knead the dough until it's smooth and holds together. This is what happens when you ask your perverted boyfriend to take a close-up of the dough kneading. You get a cleavage shot instead. The dough will be very wet and very sticky. As will your cleavage if you're doing it right. 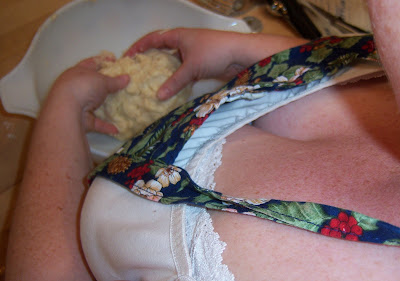 Split the dough in half, shape it into balls, flatten them into disks, wrap them in plastic and stick them in the refrigerator to chill. This dough is so sticky you have to chill it a long time in order for it to be firm and workable - probably at least two hours. 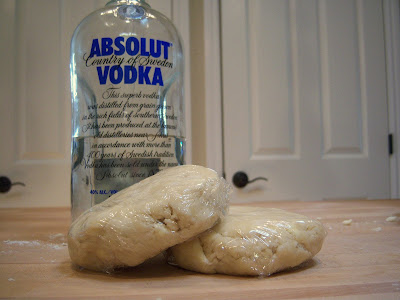 This was the perfect time to take a break and have a little Un-Christmas celebration: Chinese food and horror movies. 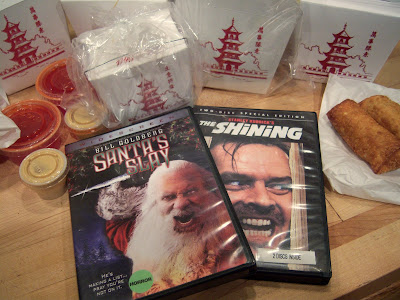 Spread some flour on the counter, unwrap your dough and roll it out to fit your pie pan. I was nervous, but look... no tears! It held together perfectly and was so easy to work with. 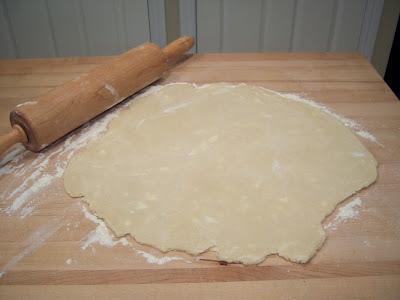 Put it in your pan and crimp the edges in whatever pretty way you want. 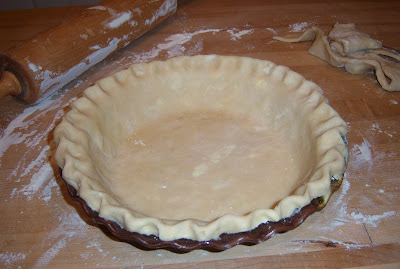 Then you get to fill it. I used the pecan pie recipe on the bottle of Karo syrup because that's what Mama Xanax uses. I also broke into her stash and used these amazing pecans from Georgia she has our southern belle cousin send every year. 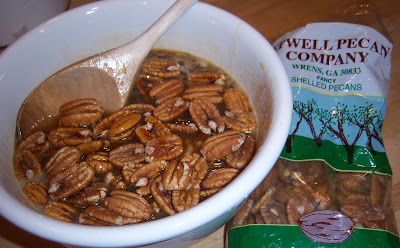 One day I'm going to artfully arrange the pecans in gorgeous concentric circles on top of the pie. This was not that day. 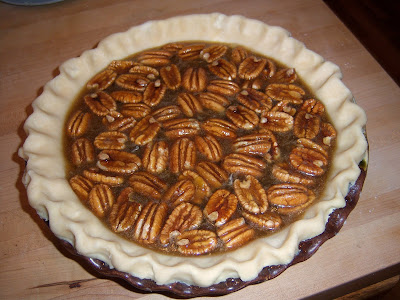 Throw it in the oven and bake it based on whatever you've filled it with. It was so fun watching this pie bake. You could actually see the vodka bubbling along the edges of the crust as it cooked out. I was so transfixed, in fact, that I forgot to take a picture, but you'll see for yourself. Look at this beautiful thing. 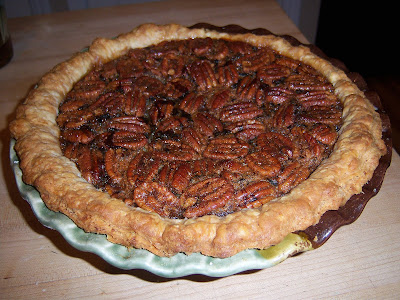 And the taste test? Oh. dear. god. This is the best pie crust I've ever eaten in my life. And what's more...I actually made it. There's no trace of vodka at all. It's tender, flaky, buttery and absolutely perfect.

I took a slice to Grandma Xanax on Christmas day and excitedly told her about the new recipe. "Sounds like a waste of good vodka," she muttered, but this is a woman who could probably make pie crust in one hand while plucking a chicken with the other.

Link to the recipe at Serious Eats
Posted by Kristabel at 5:30 PM

I laughed so hard the tears started flowing. Maybe this is the best blog, yet, Kristabel? Sure wish I had a piece of that pie with THAT crust!

(Let me try that again and spell things right this time, I hope)
That was the best cooking story I've read in ages.

I was all prepared to send you my yummy crust recipe for the crust-inept, but instead I am going to have to try yours.

You are so smart and fun and articulate and pretty and talented and, and, and, just wow!! You're cool!

SO trying this. Also-- I'm glad to know I'm not the only one who has a Special Christmas Apron. Once a year I put away my bright orange and red apron printed with old Route 66 postcards and wear my fancy Christmas apron, which hopefully keeps the cat hair out of my cookies. Mostly.

But then I thought about my own life, and how vodka has often been the answer to a variety of problems. Why not pie crust?

Why, indie, I adore you for those exact same reasons - plus more. But you forgot to mention the cleavage. ; )


Once a year I put away my bright orange and red apron printed with old Route 66 postcards and wear my fancy Christmas apron, which hopefully keeps the cat hair out of my cookies. Mostly.

Hee hee hee! I love aprons, Shieldmaiden. Keri, my invisible blog cousin, makes the most adorable ones. I'm hoping she'll post photos one of these days.

That's a gorgeous pie. Pie crusts were my kryptonite for YEARS. Then, one holiday, I was talking to my mom on the phone while I "whipped up" yet another pile of crappy dough and ....it worked. It may have been my mom's pie-mojo or it may have been I was distracted and didn't worry about it. I've been fine every since. But will have to try using this vodka idea. Maybe even in the dough.

"As will your cleavage if you're doing it right."

I love you, you big fauxgressive douche, you (how did anonymous know that's my little pet name for you?)

Ohh now I want to make a pie with my pecans. Yummy friend!

hi, i'm crossgirl, and i can't make pie crust either. but now!!! with the amazing powers of vodka, i too shall triumph! and if not, i'll have leftover vodka to console me.