There might be some sap. Some cheese. Some predictability. Some wince-inducing triteness. What can I say? Sometimes love makes a girl soggy.

Squirrel and I have been married a little over six months, and I would be lying if I said that there hasn't been a bit of an adjustment period. No matter what anyone says, marriage is more than a piece of paper. You can't just rip it up and make it go away.

Squirrel puts up with a lot. I am stubborn, opinionated, mouthy and full of sass. I am often impatient and sometimes judgmental. I am chronically overemotional and cry at all kinds of ridiculous things. I put his life on display much more often than he would choose to. In fact, he would never choose to. If all of this weren't enough, I also all-too-frequently possess the maturity level of a twelve-year old. I make prank phone calls, create stupid lyrics to show tunes and make gifts for my friends like this year's Valentine's Day cupcakes: 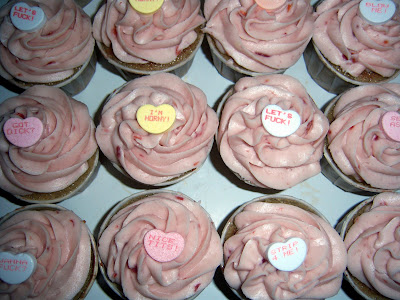 This is not to say that Squirrel is without his own eccentricities. He is an artist, and he has a tremendous brain in which he lives, often mumbling under his breath to himself and staring off into space. Some days it's hard to break through. He never puts anything back where it goes, and he is constantly losing his wallet, his keys and anything else he needs regularly. A couple of weeks ago he even lost his wedding ring.

The quirk I find the oddest, though, is that he's always leaving the faucet running. Not just a little drip, but a steady stream. I can't figure this out. He has perfectly strong hands. The handles turn easily enough. It's like mid-wash he gets so distracted by his own thoughts that he simply walks out of the bathroom with the faucet still on. This would not be such a big deal if we didn't have a precarious water situation. Our spring has a lot of issues, and we never know when we're going to be out of water - sometimes for days at a time. So to see water going down the drain, emptying what could be our last reserves, sometimes causes me to become a bit...oh, shall we say....agitated.

Yesterday I was driving in Eureka behind a man on a motorcycle. A car going the opposite way made an illegal left-hand turn and missed the bike by mere inches. It took a few seconds before I could breathe again after imagining what could have happened. The incident made me think of my friend Dana.

About ten years ago Dana's husband was killed in a motorcycle accident. She was 25 years old, and he was the love of her life. They had only been married for four years, and they had a son, Jason, who was just three. The first time I saw Dana and Jason after the accident, Jason came running to me, jumped into my arms and said, "Auntie Kristabel...did you know that my daddy's in heaven when he's supposed to be at work?"

Several weeks after that Dana called me in the middle of the night. She was simultaneously sobbing and laughing hysterically, and I could barely understand what she was saying. Apparently she had accidentally knocked over the box from the crematorium that her husband's ashes were in.

"Did you know that it's not just ashes?" She said between gasps and hiccups. "There are chunks in here too. Bones. Teeth. What the hell am I supposed to do...vacuum up my husband?"

For months I watched her struggle with her enormous grief while trying to raise her son the best that she could. She always said that he was the one thing that kept her from remaining in a fetal position on the floor for the rest of her life. There were days when I wasn't sure how she made it through. There were days when I'm sure that she thought she never would.

I was still thinking about Dana last night when I walked into the bathroom, looked at the sink and saw a thick stream of water flowing from the faucet. For a split second I felt the irritation start to wash over me. Then I looked at myself in the mirror above the sink, felt something yank at the insides of my stomach and suddenly it hit me.

There's only one thing that could be worse than seeing that faucet running water every god damn day for the rest of my life.

Not seeing it.
Posted by Kristabel at 9:45 PM

Thanks for vindicating my driving at the speed limit or under, which tends to annoy people behind me.

Far worse than being killed or maimed in a wreck would be to survive after killing or maiming another.

You're welcome. Even though I think you're just trying to get a cupcake.

Thank you for the poignant post. I will think of it whenever I feel the irritation rising when the bear in my bed is snoring loud enough to raise the roof! Where did you get the dirty hearts?

Happy love, sex and sap day my sweet, my love my friend. Who needs water when you have the Spa o'Bumblebee anyways....

Okay, you've found a way to put up with the water, but can you make him brush his teeth?

Love him every day, Kristabel, and tell him, too!

Kristabel, only you could write such a touching story and put it next to a picture of a cupcake that says "lets fuck" on it.

Anon 10:15....I got the hearts at a cute little store called Spartacus Leather in Portland.

I saw a young man in Wildberries buying flowers.
"She loves tulips, ...but she may expect roses...I don't know anymore...she is always changing her mind. I can't figure her out"

I said, "Son, you never will...but, by being here buying her flowers, you are at least doing something. And that will be better in the long run."

If you want to see a real sight, check out the rush at the flower stand at Safeway at about 6pm today.

(My vote is for live flowers from Pierson's, Eko)

I wish I liked vaginas...I'd steal you from Squirrel in a heartbeat!

Thanks a bunch, Kym.

But that faucet thing -- can't he work on it somehow? Maybe you could be the first in SoHum to have a motion detecting bathroom sink.

It is probably an attention getting behavior. Bet he doesn't do it when you aren't home.

And anon. 4:41. Oh, how I wish that were the case. Nice behavioral analysis theory though...sounds a little familiar...hmmmmmmm.

Spartacus Leather in Portland....Very interesting. The in-laws love to cheat CA out of tax money by retailing for Christmas in Portland. I know what I want next year! Whoop Whoop! That might make them stop asking me what I want for Christmas! Thanks for the tip!
Anon. 10:15

Oh where oh where did you get those candy hearts? I looked all over Longs, and darn it...I couldn't find any!

Artists need a laser like focus. I shouldn't suppose that he's going to be able to multi-task like all those boring idiots that you passed up for him do. To expect him to turn a faucet on and then again off while at the same time visualizing a masterpiece in his head is ...unrealistic. Go with the flow. Or would you rather be stuck with a drip?

Thanks for writing this, Kristabel. Too many people realize the value of what they have after only after it is gone.

Maybe a note to yourself above the sink reminding you that a running faucet is evidence he is still there would be a gentle reminder to him too?

damn. those cupcakes DO look quite tasty. even in all my valentine's-day-bah-hum-bug-ness I can still see that.

that cuts me deep. life is brutal and unforgiving. i had who i thought was a close friend go threw something simular

It was brought to my attention that I didn't tell the blog of the sinfully delightful joy that was wolfing down my wanna fuck cupcake.

Being instantly tossed into the mood with the luscious lil heart taunting me with unbridled passion, I took a bite and well let's just say that it's a good thing there wasn't some sexy blond haired blue eyed hotty standing in front of me, for he would have been left wanting and would never have gotten to experience the divine bliss that was my sweet sweet friends gift to me.

Trust me this my sweet, it was heaven and I love you my friend.