There's something in the water.... 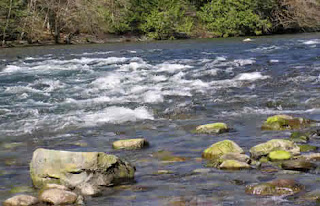 and apparently, it's giardia.

There were problems with our spring a month or so ago, and I guess the repair came coupled with contamination. Poor Squirrel has been sick for weeks and finally got the diagnosis a few days ago. I fed him yogurt and sympathy while gloating about the fact that spending my formative years swallowing the Eel and Van Duzen rivers had made me immune to the bugs. Yesterday, as I sat holding my stomach in the waiting room at Urgent Care next to a woman who thought it was completely appropriate to thoroughly floss her teeth in public, I realized that my hypothesis was about to be proven false.

Last week I took a whirlwind day trip to San Francisco to do some necessary wedding shopping. I lived in the city in the early nineties and felt a familiar catch in my throat as the Golden Gate Bridge first appeared around a curve in the road. I turned on my favorite drag queen album, The Scissor Sisters, paid the $5 toll and entered the city.

I drove down Van Ness Avenue and turned left to head through the Tenderloin on my way to Union Square. I used to work at a residential hotel in the heart of this neighborhood. It was quite an education for a girl who had lived her entire life in Humboldt County, and I loved it. The first time I looked out the kitchen window from the fourth floor, I saw a prostitute bent over having sex with a man behind a dumpster. Dually fascinated and horrified, I found that I couldn't look away until at one point the woman glanced up at the window and saw me watching. She gazed directly into my eyes, and with a touch of a smile on her lips waggled her red-tipped fingers at me. I felt my face turn the color of her fingernails as I jumped back from the window in embarrassment.

Amazingly, there was a parking spot on the street just a couple of blocks up from where I needed to go. As I opened the car door I was immediately hit with that smell that always lets me know I'm in the city: urine-soaked concrete. And on this sunny day, the heat had made it even more aromatic than usual.

Walking down to Britex fabrics, I reveled in everything I love about visiting San Francisco - the snippets of different languages, the smells wafting from ethnic restaurants, the people walking like they actually need to get somewhere, the street vendors, the varied colors of skin. I did my shopping as quickly as possible in the hope that I would have time to hit Tu Lan for lunch, but it was too late. I didn't want to get stuck in rush-hour traffic, so I grabbed a salad and a small lox pizza at Wolfgang Puck's and did some more people-watching before starting my journey back home.

I felt a little wave of sadness as I drove back through the Tenderloin, wishing that it could've been a longer visit. As the light turned green at Van Ness, and I waited to turn right while a crowd of people crossed the street, the car behind me started honking. I could see the driver waving his arms at me. Did he want me to plow through the pedestrians, or was he merely just expressing his outrage at the fact that I had to make an inconvenient turn instead of going straight? As I made my way toward the bridge, a huge Muni bus pulled out of its stop, cutting me off and forcing me to slam on the brakes. I felt the hot coffee I had in my hand splatter across my lap and said to myself, "Oh, yeah...I remember this."

My plan to miss the afternoon commute was a complete failure. After an hour of very heavy and slow traffic, I was high from the diesel fumes, and my ears were buzzing from all of the honking. I could feel my heart pounding from the caffeine coupled with the road rage around me, and I really needed to use the bathroom. After two-and-a-half hours from the time I left San Francisco, I reached Santa Rosa.

Stafford is usually about the place where I start to feel like I'm in the home stretch. This trip in particular, it was a very welcome sight. The rest of the drive home brought back memories of all the reasons I had left the city after several years and moved back to Humboldt. Escaping a man I didn't love was only one of those. As much as I adore the energy and excitement, I am a country girl at heart.

Exhausted and shaky from too much caffeine and sugar, I arrived home to Bear River Valley about midnight. Squirrel was waiting up for me, so we sat for awhile and I told him all about my adventures - probably in much greater detail than he really wanted to hear.

Later while lying in bed, still a little too wound-up to fall asleep, I listened to the sounds of the night around me - the baby birds on the back porch crying for food, a howling coyote in the distance, the gentle "whooooo" of a lone owl, and the harmonious cacophony of river frogs that has become the continuous soundtrack to our lives out here.

The honks and the yells and the fumes and the irrational rage from earlier drifted away as I fell into a dreamless sleep.

I'll take the giardia.
Posted by Kristabel at 9:54 AM

Good story. Way to bring it back around to giardia. Getting stuck in Santa Rosa traffic can make one never want to leave home again.

Are you saying, Heraldo, that you thought for awhile it was just a series of random pointless thoughts?! ;) Thanks.

I got lost in the story. The agony of Santa Rosa traffic is immediately identifiable.

So when you brought it back to intestinal illness, I totally understood.

And this is why I pray lovers of Humboldt County will fight to prevent this lovely place from becoming Northern Santa Rosa. Our isolation is our blessing.

Now if you had posted that sentiment on your own blog (which I'm sure you have in the past,) you would have been immediately attacked by trolls who see a Taco Bell on every corner as progress. Here, in this little read estrogen-filled corner of the blogosphere, you're preaching to the choir. Feel free to use the pulpit whenever you'd like. Amen.

Oh yes, the lame brains who want the choice between sprawlmart and sprawl depot.

Ugh! The flossing was insult heaped upon injury. We extend our condolences.

Thanks for the great read. Not everyone could make a story about giardia, public flossing, dumpster prostitution and hell traffic so much fun. :)

That first sight of the Golden Gate still gets me every time I come around the hill – and so does crossing the Humboldt County line on the way back.

CPR...I'm glad someone understands. I've never been so happy to hear my name called so that I could get away from floss girl.