Holiday hysteria - it's a gas.

I realize that after admitting the following transgression Heraldo will never make out with me in the backseat of my car again, but while accompanying Bee to her holiday party in Crescent City yesterday, I bought toothpaste at Walmart.

The checkout line was so long that I started to wrestle with the wrapper of the large box of peppermint candy I was also purchasing so that we could eat some while waiting. (They were those delectable melt-aways. I couldn't help myself.)

Suddenly Bee nudged me. "Did you see that?"

"Some guy just stole something and ran out the door. He threw the box right there."

Not wanting to pry myself away from the task at hand of ripping the plastic off the peppermints, I didn't look up. "What'd he steal?" I asked her.

I laughed. "Ha! Yeah, right." I had finally gotten the box open and handed her a peppermint.

"No, seriously. He slipped the Beano out of the box and into his pocket, threw the box down, and ran out the door. Look."

I looked to the place where her finger pointed, and there it was. An open empty box that used to contain Beano.

Why things like this strike me as hilarious is a mystery unto itself, but I laughed until the tears rolled down my face and my stomach hurt and the Walmart clerk looked questioningly at Bee while wondering if she was going to have to call 911. 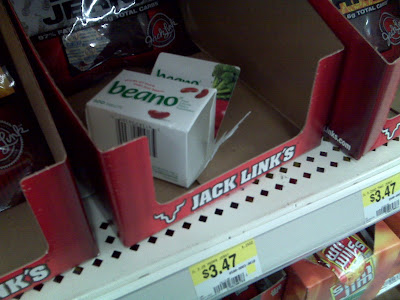 For a split second on our way out the door I felt a twinge of guilt that neither one of us said anything to an employee about the shoplifter. But then I just shrugged my shoulders because, truly, a person who has to steal Beano from Walmart doesn't really need any more problems in his life.
Posted by Kristabel at 2:06 PM

I'll never look at you the same way again.

That said, I once read that Preparation H is the single most shop lifted item.

Maybe the shoplifter was propelled out of the store by a force greater than the blowing wind.

Or maybe he thinks he can make a hallucinogenic substance from the Bean-O.

Maybe he was from out of state:

'Cause you can't buy no Beano in Oregon
We don't treat our gas like that 'round here, ya' hear
And it says so in our bible that a man is certainly liable
To Cut the cheese near noses and our ears..

LMAO!!! Poor guy. I'm glad you didn't call the cops on him. That kind of desperation deserves a break.

By shoplifting the Beano, he was just following the WalMart slogan: "Save Money, Live Better"

It still cracks me up thinking of you wrestling with the peppermints and laughing so so so hard!!!

You'll give in, Heraldo. I know just how you like it. Thanks for that bit of trivia, though.

Nice song, Boy! I'm going to be humming it all night.

Bee...what was even worse was hours later when I was trying to tell the story to Mo Pie and couldn't even speak because I started laughing so hard - again. Love you.

Okay, so I was visiting an ex hedge-fund manager friend, who is now working as a guard at Pelican Bay, and I stopped at that Mexican take-out place across from the beach on 101. I couldn't resist the machaca burrito. Later, I made an emergency stop at WalMart, but realized that I didn't have cash. I got in line and started thinking of the humiliation of using a credit card for one small item.

count your blessings. If the line was as long as you say, he was doing all of you a favor.

Thanks for making me laugh! Heraldo especially; I can't help but picture a party balloon someone let go of, and all the accompanying sights and sounds. lol!

Ouch! Imagine the pain of trying to hold it in while waiting in line!

Off topic,but what the hell happened to Keri?I hope she hasn't deserted this place for good.

are you referring to THE Mo Pie?
as in the life of pie?

No, sorry, 3:11. Different Mo Pie - although I love THAT Mo Pie. One day a boy trying to impress Bee brought a sweet little dessert over to her house. For many reasons too long and politically incorrect to write in a comment, he's been Mo Pie ever since.