Rainier Cherries and Elevators that Don't Go to the Top 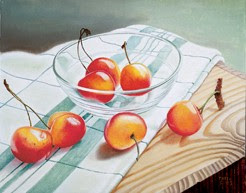 I visited the Old Town Farmer's Market yesterday on my lunch break hoping to find some pie cherries. Over the weekend I saw the movie "Waitress" and have been dying ever since to make an "On-August-11-I'm-going-to-make-a-promise-to-be-with-one-man-
for-the-rest-of-my-life-help-me-Jesus" peach/cherry pie. With lattice top so that you can see the inner mess through the tidy-looking exterior.

One booth had some particularly fine-looking cherries, but they weren't marked, so I asked the grower if any of them were for pie. With a slight lip-curl of distaste he said, "Well...none of them are the kind of cherries that people say you're SUPPOSED to use for pie...but I prefer using a sweeter cherry in a pie anyway; that way I don't have to add any sugar." He doesn't want to use sugar in a pie? What kind of crazy talk is this??!

After work Squirrel strongly suggested that it was about time to go get our marriage license, so we headed over to the courthouse. Just the thought of actually going through this first legal step caused my palms to start sweating immediately, and my lungs began to feel like they were rejecting the oxygen I was trying to get to them.

Being married is something I have experience with but have never actually mastered the skills necessary to be proficient at. My practice marriage, to a man who would go to eight different grocery stores to get the absolute best deal on everything on his shopping list even if it meant driving 30 extra miles, lasted almost four years. My near-miss marriage, to a man who said the phrase "Git-r-done" regularly, was canceled four days after I sent out the invitations. My mother has not yet gotten over the embarrassment.

He actually enjoys my quirks and puts up with my mouthy opinions. I knew that Squirrel was perfect for me two weeks after I met him, and I've been waiting for him to figure out how perfect I am for him ever since. And I guess he finally has.

So I took a deep breath and entered the dingy funky-smelling courthouse elevator. We needed to get to the 5th floor, but the highest number on the panel was 4. Huh. We pushed it anyway, the arrow pointed up, and the elevator started to move. Ding. The doors opened, and we almost stepped out into....the basement. We both looked at each other in confusion. Wasn't the arrow pointing up?

The doors closed, and again I pushed the "4" button. The arrow pointed up; there was a slight jolt and then movement. Alright, now we were getting somewhere. Ding. The doors opened on the 2nd floor, but there was no one there to get on. With a heavy sigh coupled with an eyeroll, I wiped the drops from my forehead and pushed the "4" button again with my shaky finger. The doors closed and the arrow pointed up...slight jolt....movement. Ding. The doors opened, and we stepped out into...the basement.

Squirrel looked at me with wry amusement. "I always thought that the people who work here could be described in the phrase, 'the elevator doesn't go to the top floor,' but I didn't realize it described the actual elevator as well." Almost hyperventilating, it occurred to me that perhaps this was a very large sign.

To make a long and convoluted story a little shorter, eventually we got out, got into another elevator followed by an additional elevator and finally found ourselves at the "marriage license" counter on the fifth floor. My usual coping technique during stressful situations is to imagine everyone around me in assless chaps, but in this case it just didn't work.

So panicked I had started to form tears in my eyes, I grabbed Squirrel's hand as the clerk went to print out our documents. "This marriage thing is going to be alright, isn't it?" I whispered to him.

He looked at me with completely confident deep brown eyes and replied, "It's going to be quite a bit better than just alright."

The cherries are still in the fridge, but I haven't made the pie yet. I think it needs a different name.
Posted by Kristabel at 8:34 AM

You should never take the elevator as the first steps to getting married. Always take the stairs. It's slower, more purposeful and you are very winded by the time you are finished. Sort of like the tenth date.

Breathe baby, just breathe! Go and get the choc. covered xanax that I left you and take 2. I know normal doesn't feel right or good right now but trust me. NORMAL IS GOOD. DYSFUNCTIONAL BAD.
That is your mantra. Wax on, wax off. xoxoxoxox

It is going to be alright, Kristabel! Squirrel is the one for you!

Thanks, girls! I also forgot to mention in my long list of attributes that he does the dishes and says "bless you" when I sneeze. I'm a lucky, lucky girl.

Thousands of people around the world suffer from Anxiety Disorders. It can affect everyday life and is capable of leading to a state of depression and more Anxiety attacks. In order to treat someone with an Anxiety Disorder you must know the etiology of the disorder. When the cause is known it becomes easier for the Doctor to prognosis different treatment options. The good news is that, nowadays there are a number of ways apart from the antidepressants drugs (in case you want to know more on this you can check out this link http://www.buy-xanax-online-now.com/).