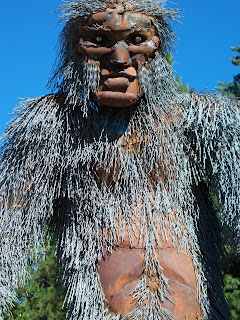 On Labor Day Weekend of 2006, Squirrel and I had packed all of our worldly belongings and had roped every friend we could into helping us move them with the promise of undying gratitude, eternal love and intoxicating lemon drinks.

We had been warned that it was "Round-up Weekend." Not really knowing what this meant, we assumed we'd meet a few cowboys on the hillside or cattle trucks on the road. What it really meant was that for four days our next door neighbors would be hundreds of teenaged cows who had just been taken from their mothers on the open range and shoved into a corral. The noise was an indescribable cacophony of bleating and screaming with a sound underneath it all that was something akin to a Nascar race track. It was absolutely horrible. I looked at my friends with a shaky smile. "They go to sleep at night, don't they?"

By the third night, I couldn't take it anymore. Squirrel found me at 3 a.m. on the couch with a bottle of wine and tears streaming down my face. "They've taken them away from their moms," I sobbed at him. "And now they won't stop crying....and now I can't stop crying...it's just so sad!!!"

It was at that moment that Squirrel determined that we would be going out of town for Labor Day weekend of 2007 - no matter what.

Fortunately for us, there are two fabulous festivals that happen every year at this time. They're both close enough for a weekend journey, and the best part is that they both revolve around the legendary and elusive Bigfoot. We decided to start our Bigfoot honeymoon at Bigfoot Daze in Willow Creek, and then move on to Bigfoot Jamboree in Happy Camp. We also decided to compare and contrast the two so we would feel like researchers rather than...well...um...big dorks.

We arrived Friday night at Tish Tang, set up camp, ate the ubiquitous roasted hot dogs and settled in for a peaceful night's sleep. As soon as we laid down, the noise began. Yelling, laughing, breaking glass, screaming, fighting, loud music...it all wafted up to us from the river bed. Then we began to hear more foreign noises: sirens. It wasn't a very restful sleep, but since newlyweds aren't really supposed to be sleeping much anyway, we made the best of it and awoke the next morning ready to start the festivities.

The festival was at the river park, and it was certainly well-attended. There were tons of people - a lot of them who had obviously been indulging in some mind-altering substances (and not the fun kind) - really bad live music and a lot of scary-looking food. I was also expecting some art, craft and bigfoot schwag, but those things were sorely lacking. There were a few booths, but most of them seemed as if they had bought out the local Dollar store and were reselling the items for $3.00. The oddest thing was that there was absolutely nothing Bigfoot - no t-shirts, no action figures, no jewelry. The paper mentioned that someone named Dr. Bigfoot would be on hand to tell stories of sightings, but we didn't see him anywhere. For a festival in its 47th year, it didn't have a very fun vibe and was more than a little creepy, so we decided that we'd pack our stuff and move on down the road to Happy Camp.


I did find it interesting that a booth from the "Creation Research of the North Coast" was there in Willow Creek. 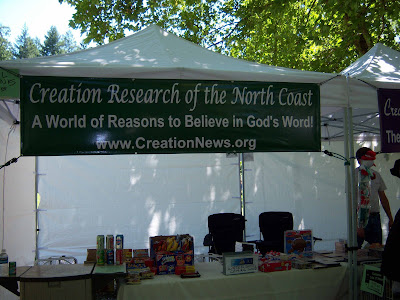 As much as I begged Squirrel to ask the guy what day Bigfoot was created on, he just wouldn't do it.

Just like the Sasquatch episode in "The Six Million Dollar Man" It's a two-parter.

Hey sometimes a story can't be told in one part.

For a festival in its 47th year, it didn't have a very fun vibe and was more than a little creepy, so we decided that we'd pack our stuff and move on down the road to Happy Camp.

Uh oh, Heads are going to roll.
My brother, who is very involved in all things touristy in Willow Creek needs to see your review.
I will send it along. Is there a reason my father used to call it Big Flop Daze.

As much as I begged Squirrel to ask the guy what day Bigfoot was created on, he just wouldn't do it.

You should have asked! There's no shame in such a question given the event. Any offense taken would've been a sign that either 1) the creation crew was in the wrong freakin' place, or 2) they don't believe in bigfoot. Which brings us back to #1.

Well...the truth is that I did go up to the guy to ask him the question...but was immediately distracted by his riveting description of the movie "The Big Trees." It was either that or his sparkly blue eyes, I don't know. I..just...lost...focus. But it's nice to have a husband to blame these things on now.

Uh oh, sorry about the bad review Eko. I just have two pieces of advice for your brother (not that I think he can do anything about the first): Less tweakers; more bigfoot.

There is a house available for rent in Loleta. It is just off of Eel River Drive on Church Street. There would still be cattle noises but more in the distant, unless they get loose.

but you would still have a few tweakers, so it would be just like a ...festival?

Unfortunately, there are tweakers, but their have been recent drug busts. Besides, we have a sheriff's deputy in the neighborhood, plus Fish and Game, the Highway Patrol, and Neigborhood Watch are a constant presence.

After living for a whole year waaaay out in the country, I can't even fathom trying to live in a place as....civilized as Loleta. There are other people there! And a store! Nope, I'll take the once-a-year cow cacophony, especially now that Bigfoot weekend is becoming an annual event.

Eko, tell your brother that I miss the big feet painted down the center of the road!!!

I have to ask the obvious...

"Well which was it? The best of festivals or the worst?"

Just to set the record straight for you "Out of Towners", no sane person camps at Tish Tang since the boundry adjustment of 1998. Sirens are not foreign noises, they are a fundamental component of our local culture.
We hold two events sacred in Willow Creek. George Bush's inauguration and Bigfoot Days. We do not sell Bigfoot items on this a holy weekend. And, maybe you failed to see the forest for the trees, as we have Bigfoot Motel, Bigfoot Rafting, Bigfoot Golf Course, Bigfoot Mini Storage, Bigfoot Contractors Supply and Bigfoot Lions Club, all whom I am sure will sell you something. Willow Creek does not have any tweakers. What you observed was perpetuiously overly anxious locals with bad teeth and a twitch.
Also, here in Willow Creek, we know for an undisputable fact that the Earth is only six thousand years old and that God is a Republican. We know of these things because of the wonderful work of the Creation Research of the North Coast.
Signed Bigfoot, aka Eco's Brother

Kristabel, you have been taken to task by the Information and Protocol Ambassador of the Eastern Humboldt region of Sasquatchia.

A longer lived 299 native than I, this representative holds a position on the board of The Gigantopithecus Creation Society.
Don't mess with him.

Oh, and the Bush Inaguration? I remember it well. Especially, when the Secret Service caught the Bush twin girls skinny dippin' with them Hawkins Bar boys. It weren't a purdy sight.

But, dammit Bigfoot, get my name right. It's EKOVOX, not Ecovox. That's as bad as spelling Kristabel with a "C"

I just have to say that being chastised by Bigfoot is....well...more than a little thrilling.

Sorry all you prim and proper souls; it is Saturday night after all.