This week my mom and dad are celebrating their 40th wedding anniversary. 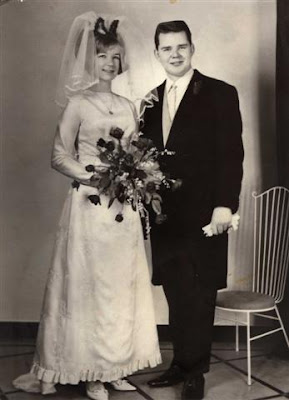 One unusually sunny Eureka day in 1968, my dad, who worked for the Pacific Telephone Company, went to install a new phone at my mom's apartment. He arrived to find her enjoying the sun in her backyard - in a very tiny swimsuit. He was so taken with her that he pretended to be missing a piece of equipment so that he could go back to see her the next day.

Three months later they were married.

Forty years after that they still leave each other love notes on the bathroom mirror.

You would think with role models like that, I would be great at relationships, and I am. I'm great at jumping into them without thought; I'm great at completely screwing them up, and I'm really great at getting out of them in ridiculous melodramatic ways. Somehow I didn't acquire the same skills that seemed to come naturally to them.

A few weeks ago I was sitting at the dining table at their house. My mom and I were sharing fudge and conversation, both of which are treats during the madness of the holidays. She was telling me about how Dad wanted to take her on a vacation for their anniversary. Having only been married a few months, it seemed like the perfect time to ask her the question I'd wanted to for a long time.

"Mom. I really need to know. What's the secret to staying married for forty years?"

She barely paused. "Oh honey, just be kind to each other."

Could it really be that simple? I thought about that for a minute, and I thought about the way that I'd always seen my mom and dad relate to each other. Things had not always been perfect. There were bounced checks, fender benders, rebellious children and all sorts of other typical things that make two people snap at each other once in awhile. I'm sure there were other things too - more serious things that my brother and I may have never known about. But I can count on one hand the number of times I heard either of them speak harshly to the other.

When my dad grumbles because he can't find something, is certain my mom has hidden it from him and has to go on a "god damned treasure hunt" to find it, my mom sweetly smiles and helps him look for it.

When my mom is upset because my grandmother has said something thoughtless and cruel to her for the umpteenth time, my dad holds her hand and tells her that everything will be alright. And he goes to fill Grandma's woodbox and fix her television regardless.

They kiss each other every time one of them leaves the house, even if it's just to run to the store, and while talking to one another on the phone, I've never heard either one hang up without saying "I love you."

After thinking about that, I realized that my mom had summed up the philosophy of their entire marriage in one sentence. Just be kind to each other.

I guess sometimes the most difficult questions are solved with the simplest answers. Maybe there's hope for me yet.
Posted by Kristabel at 10:29 PM

Your Mama knows what she is talking about. My parents have been married almost 50 years. My husband and I have been together 25. What makes it work? Being kind and treating each other with respect.

Most marriages have moments where you look at your spouse and think, "Why did I marry this man? He is a stranger to me." But no matter how difficult and estranged we might feel, we treated each other kindly. We have never screamed obscenities at each other and rarely raised our voices. Sometimes we talk a little tightly and our cheeks are flushed but we try to respect the other and hear them out. And the knowledge that we are safe with each other, that we won't lash out and hurt the other has taken us through some tough times.

And if you follow your mom's advice, you'll still be married and in love when you are an old woman.

Your mom and dad are two of the best people I have known. They love you without end.

My spouse and I have been married for 32 years...since I was still 17. We're often asked how we do it and I honestly can't answer though "be kind to each other" is a good summary.

I supposed marrying the right person is the first step. Even though I was desperately in love when I got married, I would never recommend getting married so young but for us, it worked. My parents were married for 48 years when my dad died. Mom was engaged and living in Wisconsin. When her dad died, she packed up and came to California to visit her fiance, stationed at Camp Pendleton. While there, she met my dad and fell head over heals. She dumped "Johnny" and married my dad 3 weeks later. It's GOT to be the right person.

That was really sweet, Kristabel. I'm proud of my folks for being married for over 30 years (see comment above mine... hi mommy!), and I've always had a hard time making something last more than 4 months. Hopefully I've broken that streak.

Those two being together for that long is almost as incredible as the Daughter they brought into the world!

Aaaaaw! That IS sweet.

I'm breaking records after 4+ (non-married) years. And we agree... that whole respect thing really works. Ha. We just aren't jerks to each other and I think it amazes us sometimes, after all the crap we both dealt with in the past. We're simply really good friends.

I'm raising my glass of limoncello to the two of them! Congrats!

Thanks, everyone, for your sweet and thoughtful comments. It's nice to see that so many other people successfully use the "just be kind" philosophy. Hopefully mom and dad are enjoying their much-deserved anniversary trip this weekend.

Hoping you and your own honey enjoyed all the additional contributions satellite television can bring to "Saturday Night" on Saturday night. Way to unwind after a late night, unavoidable dog poop incident and early morning strategic planning session...lmsao.....

Thanks for hanging out and the even more for the glorious bottle of limoncello! Thank you too, for the pep talk ie. lighting fire under my ass just when I needed it. Hope to see you soon!

I'm waiting excitedly to hear all about "Auntie Mo's!"

Kristabel, having such role models has made you who you are...and that ain't a bad thing at all!

Congrats to your parents.They sound like they are wonderful people,and I'm sure that you've played a big part in that.

Reading this made me tear up, Kristabel. My husband and I are working on our seventh year together and we are getting to that place. There have been some bumps in the road, but it gets easier and easier to "be kind" when you realize you really can trust a person. Your mom's choice of words is meaningful to me: I had had a crazy romantic history before I met my husband. Exhausted by drama, I prayed one night, "please send me someone kind." My exact words. Voila, my kind husband.