Being a Generation X'er I have always known the comfort of modern technology. Granted, computers didn't come along until I was in college but we always had color TV, planes and in the 5th grade we got our first microwave. It was as big as our washing machine.
Our Grandpa P. is a stubborn 84 years of life and has known only hard work with a penchant for a good scotch and water at 4:00 each day. He scoffs at computers and swears they will be the end of civilization. He refuses to even look at one. He will however, have laser eye surgery. So, in the wake of said surgery I took him for follow up the other day.
Every time we go it seems to be the same story. The doctor is running behind by about 45 min because of a surgery. Grandpa is irritated but kept amused by the various staff. First, there is an assistant who wears the elastic waist band of her pants just below her breasts. Grandpa's comment is always "There's a tall drink of water."
Then there is the short tech who is always running from one room to the next. She has the bad bleach job, curly, 80's style hair and looks much older than her 40 years. She is frequently in hot pink scrubs but Grandpa adores her because she gives him hugs and says that he is her favorite. I hope the doctor has a money back guarantee because grandpa comments on how cute she is. The surgery has obviously made him blind.
This goes on until we actually get into an exam room. Now, I thought there was nothing more dull and annoying than having your eyes examined, but I learned that in fact watching it done to someone else is even worse! By the end of the 30 minutes I wanted to tear my own eyes out and give them to Grandpa so he could just make the damn decision between 1 or 2...3 or 4!!!!
The good news is that I helped him pick out new glasses. Out go the old 80's mob fashion and in comes the 21st century. 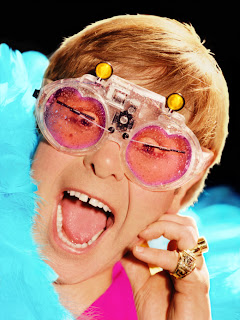 I think he is going to like this new collection so I got him some readers too.

I know! His glasses should be in this week, just in time for your big day! I think I might let him borrow the feather boa. Do you think that would be too much?

I think that would be perfect. Thank you for making sure he's appropriately attired. I'd hate for him to stick out or anything.

Keri, Keri, Keri...you are the best for taking Grandpa for his eye exam. I am sure his new glasses are wonderful thanks to you!! AF