Mishaps in the Kitchen and those Damned Canucks

On Friday night I helped to put on a fabulous themed event. I was, of course, put in charge of dessert, and I figured that nothing would be more appropriate for a party called "Campout Craziness" than a dessert of those messy, sticky, fun-filled campfire favorites: s'mores. My challenge was to figure out a way to serve 150 people s'mores -all at the same time - otherwise, with the crowd I'd be serving...someone would surely lose a body part in the rush.

I found a recipe for baked s'mores on the Canadian food network website, and it sounded perfect. Canadians. They're sturdy, outdoorsy, moose-hunting people. If anyone should be able to make a good s'more, the Canadians should. I wondered if I should try it first just to make sure. Nah. I used to make wedding cakes, for god's sake. I'm a professional. Plus, I had the help of my baking minions: Michael - a former music teacher who is highly skilled at telling really bad jokes, and Sal - the only straight man I know who suddenly bursts into the chorus of "Dancing Queen" for no apparent reason.

The recipe consisted of making a thick sauce of butter, sugar, vanilla and graham cracker crumbs, pouring it over graham crackers, and layering with chocolate and marshmallows. Then you bake this delicious concoction until the marshmallows on top are toasted, and after cooling, cut them into bars. It looked simple enough, and actually it was. At first. 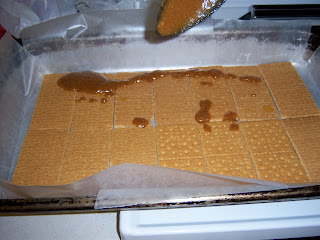 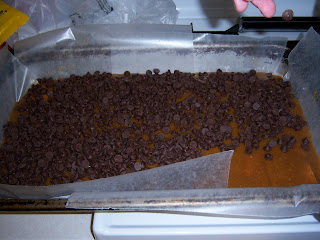 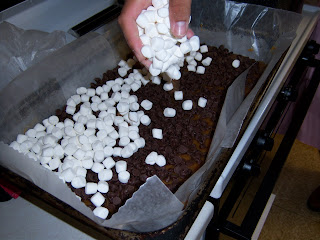 A second layer on top: 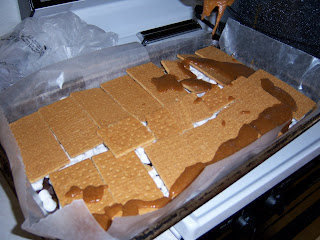 The first pan out of the oven, cooled and cut into bars: 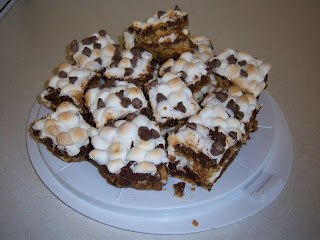 I cut the first batch from an 8" x 8" pan, which is what the recipe said to use. They cut easily into decadent little squares.

These things were absolute heaven. Warm, sweet and gooey, they tasted like a combination between a s'more, a blondie and a thirty-minute orgasm.

Here's Melissa (lead singer of The Ravens - this girl rocks!) in a s'more stupor. 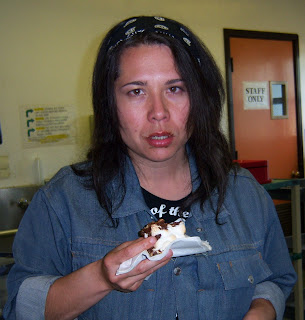 I then grabbed the next batch which was in a pan approximately 9" x 15", flipped it over and began peeling off the parchment paper on the bottom. Uh oh. Small strands of paper covered in graham cracker goop started ripping off in strings. I tried to release the marshmallows stuck to the sides to get a better grip. No luck. I then grabbed a knife and tried to slice off the bottom layer of parchment paper. Graham cracker flew everywhere; a chunk of chocolate hit me square in the eye. My kitchen minions stood with their mouths hanging open at the horror unfolding before them. With cool serene confidence I looked up at them and smiled, "This one must've gotten overcooked. I'm sure the rest will be fine. Let's move on to the next." 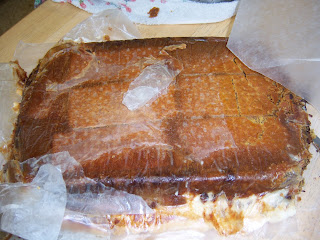 A half-hour later I was covered in chocolate, graham cracker crumbs and humiliation. Every single other batch - eight in all - had completely stuck to the bottom. What were we going to do? We've been talking about this party for months. The people want s'mores! I started imagining the torture I would endure if I showed up empty-handed, or maybe even worse yet, with cookies out of a box. Beginning to panic, I whirled around to plead with the minions to think of something, but they were nowhere to be found.

Fortunately, my curmudgeonly taste-tester was right around the corner. Taste-testing is but one of his many skills, and he also possesses nerves of steel. Walking into a kitchen with a wild-eyed woman holding a knife might thoroughly frighten a lesser man, but not John. He quickly summed up the situation and reached into his pocket. With a calm, soothing voice he pressed $5.00 into my palm. "Take this, go to Cash and Carry and buy a huge box of ice cream cones. Scoop out the s'mores and put them in those. They'll LOVE them." Having no other option, I obeyed, and later that evening..... 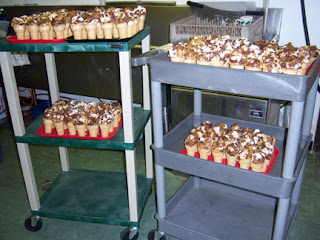 There were only a few odd looks and raised eyebrows. I guess when you give people a dose of that much sugar, they're too busy jumping around like maniacs to ask too many questions. One man, after downing his second cone, even started spinning on the dance floor while giving me a thumbs-up. "These are the bomb!!!" he shouted before falling to the ground laughing hysterically.

So in the end, the s'morecones were the hit of the night. As for why the recipe didn't work....I'm still not sure. Squirrel says that because s'mores are stoner food, we should have taken a few bong hits before baking, and they would've come out just fine. That's an interesting theory, but I'm still going to blame Canada.

If you'd like to make them for 150 people, send me an email, and I'll give you the extended version, although because of the above experience, I recommend that instead of baking this, you just throw it on a tarp and wrestle in it.
Posted by Kristabel at 8:53 PM

I doubt that. It's hard to own a gun in Canada nowadays, or so I've heard. Canadians seem to be built- in slaves, like the British.

Sounds like some ridiculousness you heard in the latest NRA "American Gun Fetishist" newsletter.

I know a number of people who have gone Moose hunting in Canada. it's a pretty big deal up there, or so I'm told .

As for the British, they may be snotty condescending bastards who wore out their welcome everywhere around the world, but they are not slaves

Boys, boys, boys....If you're going to talk like that, take it back over to Fred's house.

I'm going to have to feed you both some marshmallows.

Thanks, Carol. Yep, he had a great idea.

Where do I sign up for the smore wrestling and were do you purchase your minions?

You were going to challenge Ekovox to a s'more smack down, weren't you?

As for the minions, well, I'm sure you've got the um, er, skills to find your own. xoxox

I, Kitchen Minion with the thing for ABBA, hereby pledge my loyalty to Kristabel. I can't, nor won't be purchased to work in any other kitchen where she is not present. Regardless of how much ABBA is playing in said kitchen, I shall not leave the trusted guidance of Kristabel. Only in the event that she pimp me out, will I be willing to set foot in said Kitchen, provided ABBA is playing.