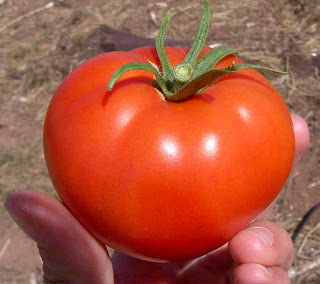 I stopped at the Farmer's Market in Ferndale for the first time Saturday afternoon. I've wanted to for a long time but don't usually make it back out of the wilderness once I'm settled in on Friday night.

There were only a few booths and since it was near the end of day, even fewer shoppers. One man in a bright yellow shirt had some gorgeous tomatoes on display. As I approached, he grabbed one of them and stuck it in my face. "You've gotta try this Early Girl. Here, take the whole thing." He had me with one bite. I bought six of them to make one of my favorite salads - tomatoes, red onions, basil, a red wine vinaigrette and a bit of chevre.

At the next booth a woman was selling baked goods - delicious looking mini pies and muffins filled with all kinds of berries. The next booth had piles of squash, cucumbers and green beans. There were also lettuces, herbs and picked-that-day marionberries.

We are really fortunate that in Humboldt we have access to such great local foods. Fondling the fresh ripe produce always takes me back to a time when my mom and grandma used to grow all of their own fruits and vegetables. We ate them fresh throughout the summer and canned, frozen and dried year round as both were skilled at "puttin' by." My grandma also raised chickens and cows, and my dad hunted and fished. My mouth still waters at the thought of berry jam, home-smoked salmon, sweet corn eaten raw right off the cob, venison jerky, rhubarb sauce, lemon cucumbers, canned peaches and poppy seed kolaches.

Shopping at the farmer's market makes a person feel good. You get to talk to the growers and they tell you about their farms and give you ideas about new ways to prepare the food you're buying. You hand them your money, and you know that it's going directly back to them so that they can live the life they so obviously love.

This is all wonderful, but for me there's something deeper. For me, shopping for food has become my own little political act. I'm not alone in this. Check out Slow Food, the Farmer's Diner, the 100 mile diet, books byMichael Pollan and Jane Goodall. Eating locally is a movement that's becoming more of a revolution every day.

There are so many terrible things happening in the world today that I have no control over and virtually no say in. I write letters to my legislators and protest in the streets, but the majority of the time I'm left with a sense that my voice doesn't really ever get heard.

Choosing what I put in my body, though, is different. By shopping at farmer's markets, choosing local foods in stores or joining a CSA, I am not just nourishing myself, my family and my community. The best part is that it's a direct way to say, "Screw you" to globalized corporate agriculture.

"Hey, find someone else to eat your nasty, mushy, dye-injected, pesticide-sprayed,trucked-1500-miles-over-a-week-ago-while-
being-artificially-ripened-on-the-way tomatoes, because it ain't gonna be me."

And that makes me feel just a tiny bit powerful.

This is an immense subject, and one that's close to my heart. I could go on for days about genetically modified frankenfood and how organic foods have been taken over by corporations and how the U.S. exports $20 million worth of lettuce TO Mexico and then imports $20 million worth of lettuce FROM Mexico and the complete insanity of this, not to mention antibiotics and growth hormones and chickens in cages who cannot even stand up, but I simply can't right now.

I've got a salad to make. Viva la revolucion!

P.S. Carol and Greg have some nice pictures of the Arcata Farmers Market at their place right now.
Posted by Kristabel at 9:19 PM

My goal is to make some canned pickled beets this week. I love the farmers market and there is a HUGE one in Portland. Next time you come up we will have to go!

How is our garden? My tomatoes are about the size of a marble and green. I'm envious of the tomatoes you got!!

Kristabel: Such nice things you said about your mom and grandma. I am glad that we had an impact on your life and helped you become the activist you are to save this precious earth!

Look, everyone - my mom reads my blog! Thanks, mom. You're the best.

Just ignore all that stuff about spankings and sex and booze, alright?

Carol...unfortunately I usually had my nose stuck in a book when I was a kid, so I missed out on learning all the skills like canning that I wish I was proficient at now. But it's never too late. What kind of berries did you use?

Ker...maybe we could have pickled beets AND bread-in-a-can at the wedding! Be sure to check out Farmer's Diner. The goal is to have these pods of restaurants around the country supporting farms within a 200-mile radius. Portland is slated for one of the pods - fabulous!

As for the garden, it's doing alright....I'll post some pics. and an update later. The tomatoes are big but not ripe yet. Perfect for fried green tomatoes! xoxoxoxo

"Ker...maybe we could have pickled beets AND bread-in-a-can at the wedding!"

Oh please....do it! You'll remember it for the rest of your lives.

Yes, Eko, you're a true inspiration. We will certainly take pictures of the beautifully decorated bread-in-the-can and post them for you!